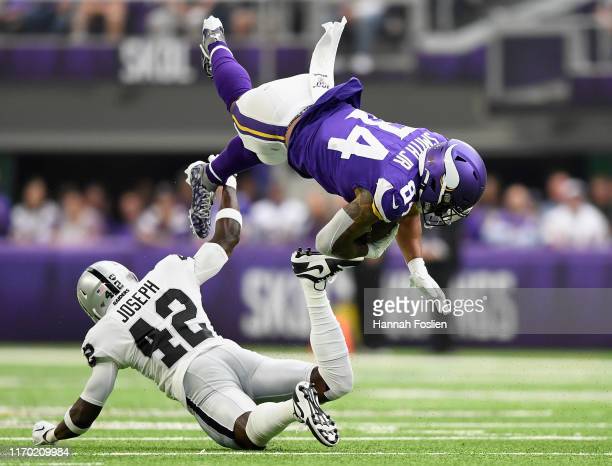 Shortly after S Karl Joseph was released by the Las Vegas Raiders on Tuesday, the Pittsburgh Steelers announced that they had signed Joseph to their practice squad. Joseph, 27, visited the Steelers in late March as a free agent after his contract with the Cleveland Browns expired, but he elected to return to the Raiders where he figuratively had a better shot of competing for a starting job. However, after battling through some nagging injuries during preseason play, the Raiders opted to cut bait with Joseph, setting up the opportunity to sign with Pittsburgh.

In five seasons in the NFL, Joseph has started 49-of-63 games played and has recorded 303 total tackles (220 solo) along with 11 TFLs, three sacks, five fumble recoveries and five interceptions. What should be noted about Joseph is that he has never played a full season in the league, having missed time in every season played due to injury. His healthiest season came back in 2017 where he managed to play in 15 games but has missed as many as seven games back in 2019.

Given Pittsburgh’s interest in Joseph dating back to the 2016 NFL Draft when the team sent HC Mike Tomlin and GM Kevin Colbert to his Pro Day along with their previous attempt to sign him this spring, it shouldn’t come as a surprise that Pittsburgh moved forward to get Joseph on their practice squad shortly after his release. Reports have surfaced that Joseph’s stay on the practice squad shouldn’t be long, as he should look to be promoted to the 53-man roster after completing COVID-19 protocols over the next few days.

So, what does Joseph provide the Pittsburgh Steelers defense? I’m glad you asked. Karl Joseph may be more of a safety time than a traditional nickel corner that the team is desperately looking for after the loos of Mike Hilton. However, when you dive into the tape, you see Joseph do a lot of similar things Hilton was known for as a superb run defender both from the safety position as well as from the box and detached in the slot as the nickel/dime defender.

Here on this run to the left side against the Denver Broncos back in 2019, we see Joseph aligned as a single-high safety in the end zone. Once the ball is pitched to the left, Joseph breaks on the ball, coming downhill quickly but wisely squares up to make a tackle attempt on the runner in open space. While he undercuts the runner instead of driving through him with a form tackle, I like how Joseph controls himself to make the play and get the ball carrier on the ground on this rep.

Joseph is a fairly instinctive defensive back given the position flexibility he has transitioning roles in the defensive formation and tending to be around the football. We see his football intelligence here a few plays later in the same game, rolling down from the single-high safety spot to the LOS, reading the run to the right. He fends off of the block by #87 Noah Fant, keeping his shoulders square to the LOS and takes out #30 Philp Lindsay’s legs from underneath him, cutting him down at the line for no gain.

This next play is eerily similar to what Mike Hilton was known to do in Pittsburgh as a blitzer off of the edge. He lines up just off of the LOS on the outside shoulder of the TE and shoots the C-gap once the ball is handed off, getting around Fant’s block yet again to make a play in the backfield for a big loss on the play.

His angles of pursuit can definitely improve, as he will attempt to trip up ball carriers at times because he is coming in too fast and uncontrolled like we see on this stop against the Chiefs. However, he still manages to evade the block attempt by #81 Blake Bell and trip up the back in the backfield shortly after taking the handoff, causing him to fall behind the LOS for the loss on the play.

So, we have seen Joseph align as a deep post safety as well as on the LOS and in the box? What about in the slot? Yup, he has done that too on occasion. Check out this run stop against the Vikings where Joseph splits out in the slot over #84 Irv Smith Jr. He keeps his eyes in the backfield until he sees the handoff to #33 Dalvin Cook and proceeds to engage Smith, fight off of the block, and get in on the tackle to keep Cook out of the end zone.

Another factor you have to consider about Joseph’s game is his aggressiveness as a hitter. The guy is legit head-hunting out there on the football field at times, flying in to either impact the pass or blow up a runner by decleating him off of the ground. We see that latter here on this big collision last season when he was with Cleveland, coming in from the deep safety spot to take the receiver on the jet sweep to the left out of bounds with an impressive hit.

Joseph provides a similar impact in the passing game as mentioned above, making receivers think twice about trying to make a play over the middle of the field. Going back to the Broncos game, we see Joseph roll in from centerfield to aid the cornerback who gave up a little separation to #81 Tim Patrick. Joseph forces the incompletion by going up into Patrick as he attempts to make the catch in the air, putting him on his back as the ball drops to the turf.  While I enjoy the physical demeanor, Joseph may need to dial it back a little bit in the future in order to avoid getting a personal foul call for targeting which could have resulted from this collision.

While pass coverage may not be Joseph’s strong suit compared to playing near the LOS or his run defense, he shouldn’t be seen as a liability here either. He was trusted to be the last line of defense often during his time with the Raiders and Browns, and often showed plays like the one below where he gets put in a difficult spot and still manages to make the play.

Joseph is playing deep half at the bottom of the screen and is attempting to split the difference between the receiver running up the middle of the field and another breaking out to the sideline. He eventually breaks off just in time to aid the defender giving up separation down the middle of the field, getting to the receiver in time to play the ball and force the incompletion.

Joseph has five career interceptions in the regular season, but a lot of these came from him playing as the deep post safety undercutting the route or capitalizing on a poorly thrown ball like we got to see from #4 Chad Henne in the Wildcard game against the Chiefs last season where he basically threw the ball straight to Joseph.

However, Like I mentioned above, Joseph is more than capable of playing as a deep center fielder that Pittsburgh has been looking for as a key backup to Minkah Fitzpatrick and can potentially allow Fitzpatrick to move around more in the defense. Here is an interception Joseph makes on none other than yours truly, Dwayne Haskins from last season, undercutting the route and manages to get a big return on the run back into Washington territory.

Joseph has had his moments where he has come in the clutch in coverage in key situations of the game. Here on this play against the Lions back in 2019, we see Joseph pick up the TE coming across the field on the play action rollout to the left. The TE has the clear size advantage on Joseph, and ties to box him out as he attempts to haul in the score to tie the game. However, Joseph elevates and plays the ball in the air at the catch point, forcing the ball out of the TE’s hands and forces the incomplete pass at the end of the game to seal the win for the Raiders.

You know the saying, “If you can’t beat them, join them,” right? Well, in this case, Pittsburgh may be flipping this saying around thinking if they can’t beat a team, it may be wise to acquire some of their players to help swing the odds in their favor. If you may have forgotten, Joseph was the one who recovered the botched snap in the end zone for the touchdown at the beginning of the Wildcard game against the Browns (I apologize in advance to any Steelers fan that suffers from PTSD after re-watching this play.)

Overall, Joseph is a great addition to the Pittsburgh defense with all the hats he can wear. He can be that backup free safety that Dave and Alex have been saying the Steelers need to add on the Terrible Podcast, having the starting experience to play there and allow DC Keith Butler to disguise coverages more if they choose to with their star safety Minkah Fitzpatrick. He also can be that heat-seeking missile in the box and close to the LOS that will be an asset against the run much like Mike Hilton was. While not his primary spot, Joseph has experience lining up in the nickel and dime role for a defense and could be the sixth defensive back in on dime packages.

Should Joseph be healthy and good to go after completing COVID protocols, expect him to be promoted to the 53-man roster before the teams’ first game against the Buffalo Bills and play a key role in the defensive backfield for the Pittsburgh Steelers this season.

What are your thoughts on the signing of Karl Joseph? Do you think that he will provide much-needed help to the defense? Are you concerned that his play may drop off or with his previous injury issues? What role do you see him playing in 2021? Please leave your thoughts in the comments section below and thanks again for reading!