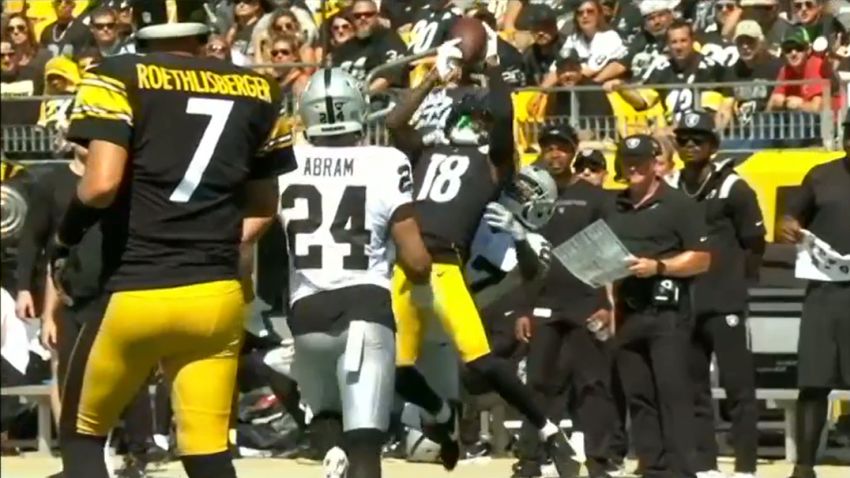 It is still very early in the season. They also have a tendency to come in bunches at times. But at least so far, off of a small sample size, Pittsburgh Steelers wide receiver Diontae Johnson has escaped the first two weeks of the regular season without dropping the ball.

This is highly significant given the fact that drops were a year-long concern for him last year. Every outlet I’ve seen that tracks their own drop statistics had him leading the league, at least into double figures. Pro Football Focus credited him with 15 drops in 2020.

They also credit him for having the most targets so far this year without dropping a pass in the entire NFL. the third-year wide receiver has already been targeted 22 times in two games. Catching 14 of them for 141 yards and a double-clutch contested-catch touchdown. Needless to say, the eight incompletions in his direction have been classified as uncatchable or not on target (or defended by the opponent).

He has the most targets WITHOUT a drop this season (22) pic.twitter.com/B4GIOXtg2h

Johnson is averaging 2.01 yards per route run thus far, which is the highest on the team, ahead of Chase Claypool’s 1.92. He has also been able to catch two of the three contested balls that have come his way thus far in 2021 from the arm of quarterback Ben Roethlisberger.

A third-round pick out of Toledo in 2019, Johnson became the Steelers’ top target during a troubled season in which Roethlisberger was out for the year and JuJu Smith-Schuster was hampered by injuries. While he had his warts, he showed great potential, and was able to live up to much of it last season.

He led the team in receiving yards in 2020 with 923, finishing second behind Smith-Schuster with 88 receptions, and he bettered his five touchdowns from the year before with seven. But his drops, fumbles, slips, and miscommunications in-route continued to dog him.

The Roethlisberger-Johnson connection remains imperfect—they certainly seemed to not be on the same page at least a couple of times on Sunday, including on the interception on which Roethlisberger clearly expected Johnson to continue upfield but did not—but there is a reason he is the go-to target.

And that is because he is the guy who gets open. He has established himself as one of the best pre-catch separators in the league, certainly far exceeding all of his teammates in that ability, which is why he already has 258 targets in his career. He had 144 last season.

On Sunday against the Las Vegas Raiders, he caught nine passes on 12 targets for 105 yards, his first 100-yard game since Week 11 a year ago and just the third of his career. It was also just the third time he has caught at least nine passes. He already has two 41-yard receptions this season; he only had five 40-yard receptions in his first two seasons, none longer than 47, two of which were on short throws.