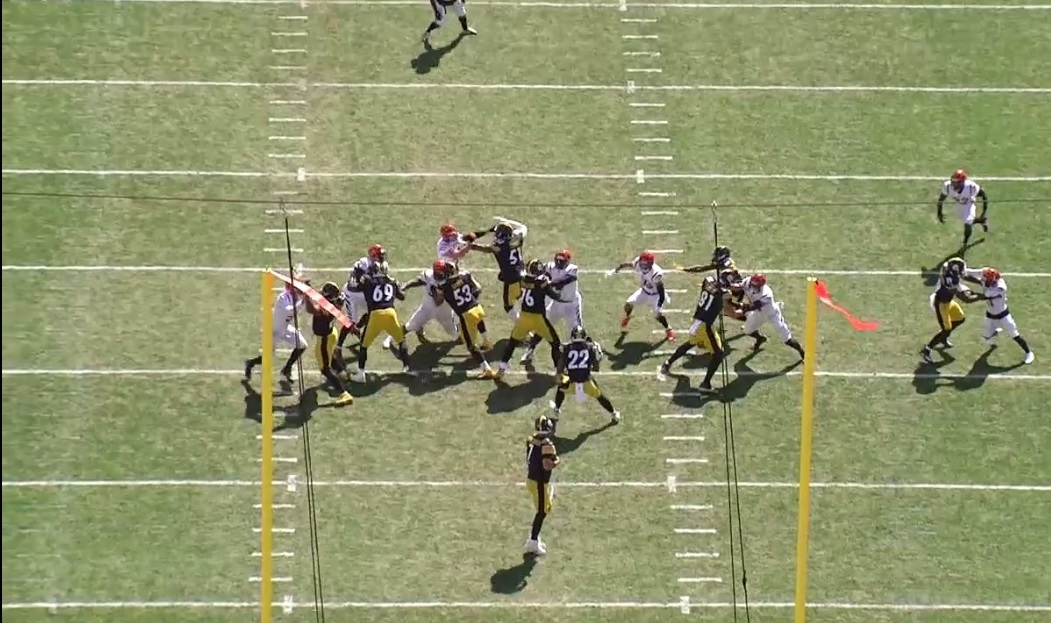 Merril Hoge offered a bleak, though accurate, picture of the Pittsburgh Steelers’ offensive line and by extension, their running game. He joined DVE’s Randy Baumann yesterday to talk about the team’s run blocking woes up front.

“They went back to a lot of man blocking schemes,” Hoge told the show. “I think we talked about that. You’ve got number 76 [RT Chukwuma Okorafor] blocking. Their pad level is so high that they get no movement. I mean they’re blocking with their chest and they’re doing a dance at the line of scrimmage. You can’t run the ball like that. Shoot, you got two guys on one, they get no movement. And then they don’t come off and block another guy.”

Pad level and movement at the line of scrimmage were two issues that plagued the run game a year ago. Run blocking is all about leverage. It doesn’t matter how big or strong you are if you aren’t, as Hoge says, playing with the proper pad level. If defenders can control the block at the point of attack, they can create space between the block, allowing them to hold their ground and keep vision on the football to be able to shed when the RB makes his cut.

While Pittsburgh’s become a more physical unit than a year ago, there are still too many stalemates up front, especially at right tackle. Okorafor is a below average run blocker, especially at the point of attack (he’s better in the second level) and it’s one reason why the run game is stalling out. Zach Banner has begun to practice again and should become the starting right tackle when he’s ready. It won’t transform the Steelers’ run game but it could help.

Hoge says even when the group gets some movement, there are too many times where mental mistakes thwart the play.

“And then about 30% of the time, they miss an assignment. So they have somebody unaccounted in those cases.”

Issues we pointed out in a video breakdown last week after the Raiders’ game. And issues that did not get corrected in Sunday’s loss to the Bengals.

Through three games, the Steelers rank last in several rushing categories. Last in yards per game (53.0), last in yards per carry (3.2) and their success rate is among the worst in football if not the worst. The team has somehow taken a step backward from a year ago. Over the first three weeks, Pittsburgh has rushed the ball for 159 yards. They’ve only rushed for fewer yards three times in franchise history: 2013, 2002, and 1945.

Hoge says the issues he’s seeing can be fixed. But they must be fixed immediately.

And he’s right about that. The entire Steelers’ offense revolved around an improved rushing attack. One that would put less pressure on Ben Roethlisberger, a quarterback no longer capable of carrying an entire offense (only a few guys can). But that hasn’t happened. Against all odds, the team has gone in the wrong directions, taking more steps backward. Until there’s some semblance of a run game, even an average one, this offense – and this team – is doomed.