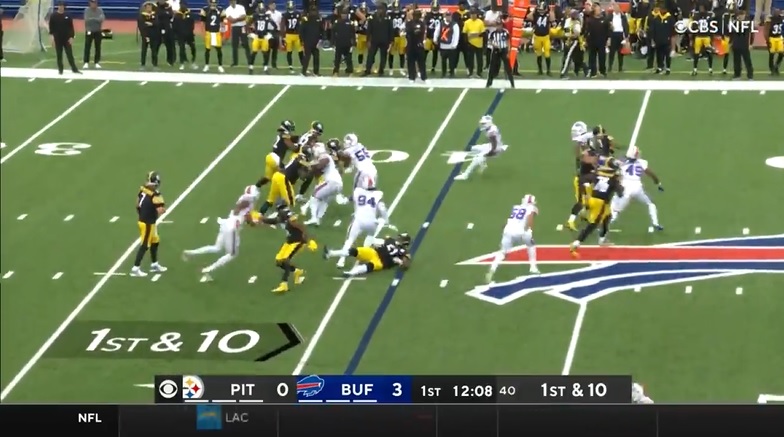 Even with a first-round running back, a brand new offensive line, and new coaching staff, the Pittsburgh Steelers’ run game of 2021 didn’t look much different than the run game of 2020. Pittsburgh showed a commitment to the run game with 21 carries (granted, a couple were kneeldowns) but for just 75 yards. Najee Harris had just 16 carries for 45 yards with most of those yards coming the hard-earned way, the post-contact variety.

Offensive coordinator Matt Canada knows what the rest of us know. That performance wasn’t good enough. And it must improve.

Pittsburgh’s success rate was poor, too, with well under 50% of Harris’ rushes being considered successful by modern standards. He did, at least, convert a third-and-inches situation, Pittsburgh’s kryptonite a year ago, but Harris rarely had running room against the Bills’ tough D-line. As they did for the rest of the offense, things improved in the second half. Harris’ first carry went for nine on a well-executed gap run with his long of the day going for 18 later in the day, setting up Diontae Johnson’s five yard touchdown for the go-ahead score.

Canada got into more specifics of how the run game can improve.

“We just have to continue to execute better…we have to raise the level of play, the production, the efficiency. Those two-yard runs need to be four-yard runs. Running the football is hard. There’s a reason why everybody doesn’t do it. It’s a challenge and it’s a hard job for those guys up front. It starts with everything we do. Schematics: we’ve got to do a little bit better job on our side—a lot better job. Put better plays in, put them in a better position, and go.”

Since Week 7 of last season, the Steelers have only had one game in which they ran for 100+ yards. That came in Week 11 against Jacksonville, a 106-yard performance. Over that same span, every other offense has at least three games of 100+ yards.

Pittsburgh will take on a formidable Raiders’ front this Sunday though one without DT Gerald McCoy, lost for the year due to a knee injury. The Ravens ran for 189 yards and 5.6 yards per carry against them Monday night. Of course, they have Lamar Jackson and the Steelers do…not. Regardless, the Steelers need to see results from their run game not for the sake of balance but the sake of efficiency.