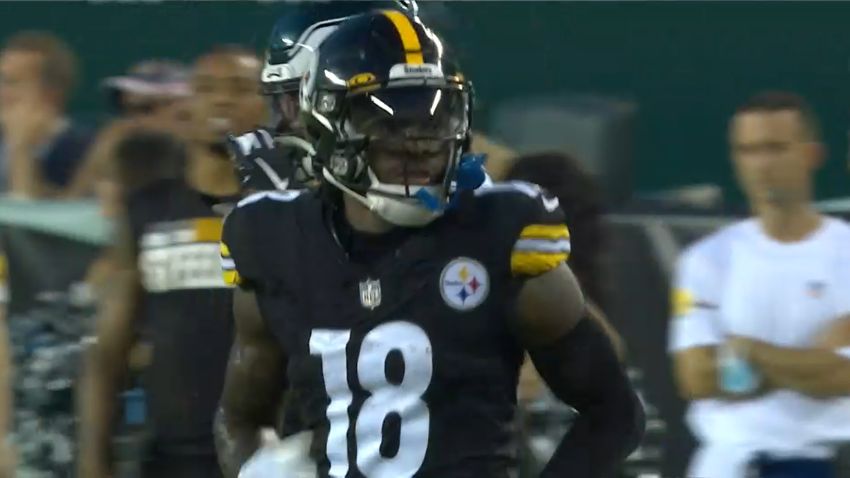 Two big plays completely flipped Sunday’s Week 1 contest between the Pittsburgh Steelers and Buffalo Bills around. Trailing Buffalo the entirety of the game, Pittsburgh entered the fourth quarter down 10-6, thanks to a Herculean effort from the team’s defense.

Then to start the quarter, Ben Roethlisberger connected with Diontae Johnson on a five-yard touchdown pass, where Johnson had to concentrate while running backward after the pass was initially tipped up in the air, bring in the ball after the tip, and get both his feet inbounds. Johnson did so, making the score 13-10. One minute, 34 seconds later, Pittsburgh’s Miles Killebrew blocked a punt which Ulysees Gilbert III recovered and returned to the end zone for a 20-10 lead, which led the team to the 23-16 victory.

Much of the praise for the turnaround after the game went to Johnson’s focused catch, who was asked about it first thing following the game.

“It was just really concentration, for real. Keep my eyes on the ball throughout the whole play and just making the play, and taking a lead, at that,” Johnson said. “We just talked about it, somebody had to make a play, and I just stepped up.”

It was a big moment for Johnson, Ben Roethlisberger’s safety net among the team’s plethora of pass catchers but who was coming off a season where drops resulted in a temporary benching. Fighting to prove himself a reliable and key fixture of the team’s offense, Johnson did so with error-free football, leading the Steelers with five receptions, those going for 36 yards.

None were bigger than the five yards picked up on that touchdown that gave the Steelers the lead, and it was a moment that showed Johnson’s desire to help the team even more considering that earlier in the game, Johnson went down with an injury. In the first quarter, he and a Buffalo player collided, looking to bang knees, and Johnson stayed down on the field before limping off the field with help to the medical tent.

“I just kind of got tied up in a play and whatnot, knee a little banged up or whatever, but I’m fine,” Johnson said. “Just came back in the game and helped the team win.”