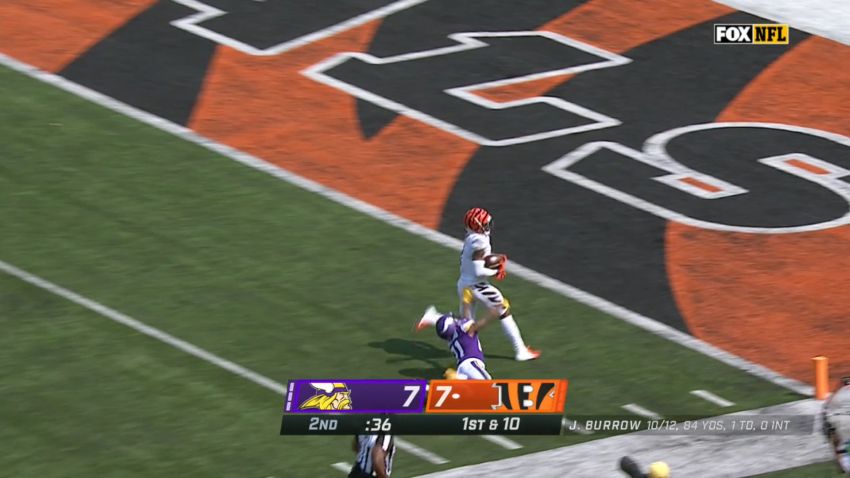 Three AFC North teams played on the first Sunday of the 2021 regular season. Two of them came away with wins, and one of them was the Cincinnati Bengals, who for the second year in a row held a top-five draft pick by virtue of their earning it the old-fashioned way: not being good.

While we can probably hold off on the streamers and confetti for a home overtime victory over the Minnesota Vikings, it was a not insignificant afternoon, marking the inaugural NFL connection between quarterback Joe Burrow and wide receiver Ja’Marr Chase.

Burrow was the first overall pick last year. Chase was selected fifth overall in April. They played together during LSU’s historic 2019 season. You know the story. You also know, if you’ve been reading, that Chase has had drop issues in the preseason and training camp after sitting out the 2020 season.

That wasn’t a concern on Sunday. He caught five passes for 101 yards, including a 50-yard touchdown connection late in the first half. It was one of two touchdown passes for Burrow, going 20-for-27 for 261 yards.

“I’ve been hearing that. That’s just trash talk”, Chase said after the game when he was asked if criticism of his performance during the preseason over his drops had gotten back to him. “I was just focused on catching passes. That’s all I’m supposed to do”.

Chase only played significantly for one season in college. That year, in 2019, he caught 84 passes for 1,780 yards and 20 touchdowns across 14 games for the undefeated Tigers, culminating in a national championship, and sending Burrow and his 60 touchdowns off to the NFL Draft to be selected first overall.

“It did feel like old times, to be honest”, he said of being on the field again and making plays on the other end of Burrow’s arm. “I knew I was going to do it. It was just a matter of time. I just had to play my game and focus on what I came here to do, and that’s what I did”.

Given that he sat out the 2020 season, and LSU went undefeated in 2019, the Bengals’ victory on Sunday marked the continuation of an extended personal winning streak. “It has been a while”, he said, since experiencing his last loss, almost forgetting what it’s like. “I don’t want to know”.

The Bengals have the Chicago Bears next on their schedule, a team that has a tendency of finding ways to lose. After that, they pay a visit to the Pittsburgh Steelers, who took down the Buffalo Bills on the road in their own season opener. Will Chase still not taste the bitterness of defeat by then?