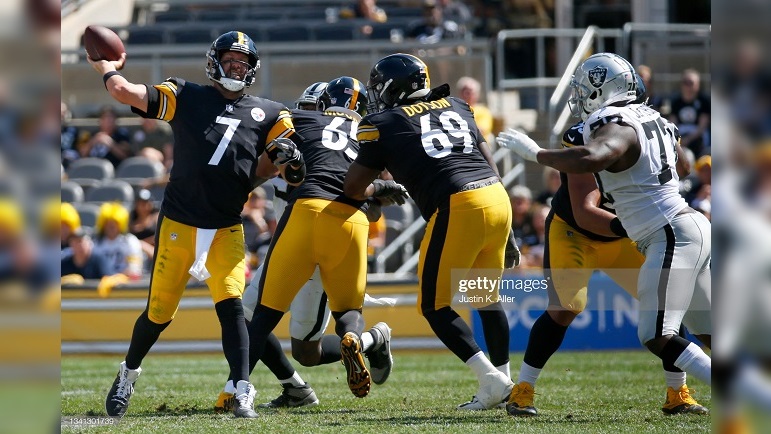 Following last week’s loss to the Las Vegas Raiders I wanted to take a look at the Pittsburgh Steelers run game and identify what’s behind the poor performances. There are a number of factors at work, first and foremost the performance of the Offensive Line. An offenses’ success starts and ends with the men up front.

Let’s think back to Patrick Mahomes trying to perform miracles in the Super Bowl. For all the ability that Mahomes has, the great coaching setup in Kansas City and the talent that surrounds him (Hill, Kelce, and others) the Chiefs ultimately failed because their offensive line couldn’t get the job done. This is also the reason why during the offseason they took aggressive steps to change that, trading for Orlando Brown, picking up Joe Thuney and selecting Creed Humphrey in the draft.

The Steelers’ Offensive Line, like the Chiefs, is almost a brand new unit. Going back to the Steelers playoff exit against the Browns, only one player who started that game remains, Chukwuma Okorafor. You may remember, much to the anger of Steeler Nation, that Kevin Dotson was benched for Matt Feiler.

It’s clear at this point that the Steelers’ Offensive Line are not playing at the level required to have sustained success. Their struggles have been well documented. In this article however I wanted to look strategically at why else the Steelers run game has struggled. Here’s are my observations from last week’s game:

Against the Raiders the Steelers played against a defense led by Defensive Coordinator Gus Bradley, who came to fame running the Legion of Boom defense with the Seattle Seahawks. He helped position them to compete for a Superbowl before leaving to become the Head Coach of the Jaguars.

He is known for being a big single high guy. What I mean by that is his defenses are going to play a lot of 3 Deep Zone (not simply Cover 3) with one Safety in the deep middle of the field. The benefit to playing this style of defense is the ability to have a bigger presence in the run game by aligning in 8 man fronts, especially when an offense presents run heavy personnel groupings and formations. One safety is typically used as the centerfielder, examples of this would be Earl Thomas, Minkah, and Trevon Moerig for this year’s Raiders. The other is used as the box safety, think Kam Chancellor, Keanu Neal, and Jonathan Abram.

Let’s take a look at this pre snap picture of the first play of the game. The Steelers come out in 11 personnel (1 TE and 1 RB) and are aligned in a balanced formation with two receiving threats to each side. To the boundary the Steelers are in a condensed set with Juju and Freiermuth aligned tight to the line of scrimmage. The Raiders have 8 defenders in the box, playing the run as labeled below.

Aligning in single high defense gives the defense an advantage in defending the run as there will normally be an unblocked defender on each play. 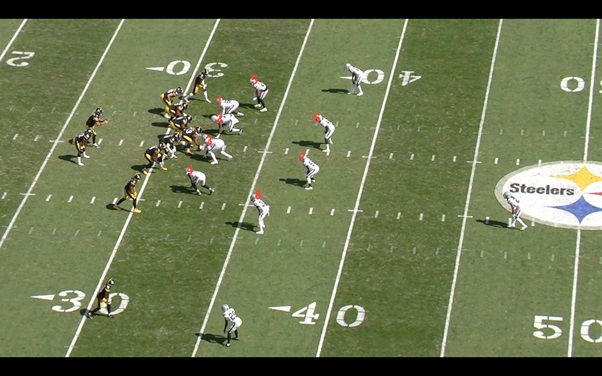 From a schematic perspective; in order to get a team out of single high coverage structures you must be able to win 1v1 on the outside, particularly when aligning in traditional run-heavy looks as shown above. If your receivers can consistently win 1v1 or at least threaten the ability to do this then it will require the defense to provide help, often from one of the Safeties. At this point the defense cannot play with an 8 man front and this then opens the door to run the ball.

Las Vegas Cornerbacks Trayvon Mullen and Casey Hayward Jr. did a great job giving up very few plays on the outside last Sunday. According to PlayerProfiler, Hayward, when aligned vs Chase Claypool, gave up zero receptions on three targets. On the other side Mullen gave up a handful of receptions to Diontae Johnson, however he did finish the day with an interception of his own. The Raiders are 2-0 for the first since 1995 and their resurgent defense is a big reason why.

This first play taken from the Steelers’ second drive, shows Ben Roethlisberger targeting Chase Claypool as part of a post / wheel concept vs Cover 3. The QB will read the leverage of the Corner. If he is running with the post, then throw the wheel and vice versa. Hayward plays it perfectly, first squeezing the post and passing it off the Moehrig and then working back out to the wheel route and making the pass deflection.

The very next drive the Raiders forced an interception, giving their offense great field position to work against a banged up Steelers defense.
The Raiders move late and get into a 3 deep zone with Trayvon Mullen aligned over Diontae Johnson. Mullen’s coverage on the play was good, Johnson was able to gain limited separation on his deep out route, however the pressure given up by Dan Moore Jr and Najee Harris does not allow Ben to throw the ball on time.
Ben then escapes the pocket and whilst under duress overthrows Eric Ebron and the ball is intercepted by Mullen for the games first turnover.

Late in the first half the Steelers have a 3rd and 12 in their own half. The Raiders again give the Steelers a 1v1 matchup on the outside with Chase Claypool against Damon Arnette. Instead of throwing the ball beyond the line to gain, Roethlisberger checks it down to Johnson who is running a drag from the opposite side of the field. This results in a minimal gain. The lack of ambition on the play, either from the play call or Ben’s decision making is disappointing. The Steelers must be able to generate explosive plays in order to be successful.

On this next play we can see that pre snap the Raiders are aligned in a 2 high shell however post snap they rotate to another 1 high coverage look, this time it appears to be Cover 1 Robber. One Safety is responsible for deep middle of the field whilst the other plays the ‘low hole’ assisting with routes thrown underneath in the middle of the field.

Although the coverage itself has changed the structure has not and this means that there is a 1v1 matchup on the outside with Diontae Johnson vs Damon Arnette . Unfortunately Roethlisberger and Johnson were not on the same page (probably because DJ didn’t read the post snap movement as Ben did), which resulted in an incompletion and a punt for the Steelers offense.

The final clip shows what can happen when the Steelers are able to protect Ben and win on the outside. Claypool runs a simple go route. He flies past Damon Arnette, stacks the defender and catches the deep bomb from Ben that results in over a 50 yard gain. If the Steelers were able to consistently hit on these types of play, the Raiders would have had no choice but change up their coverage, making it easier for the Steelers ground game.

If the Steelers are going to have success running the football not only must their offensive line improve but they must also threaten teams on the outside and help to take a safety out of ‘the box’ These do not have to be 50 yard go routes but a combination of out routes, comebacks, fades, and back shoulder throws.
Running against loaded boxes is incredibly hard, teams must find a way to even the numbers, in Baltimore it’s the use of Lamar Jackson as a runner, other teams use Run Pass Option plays (RPOs) In my opinion in Pittsburgh it needs to be the use of the downfield passing game.