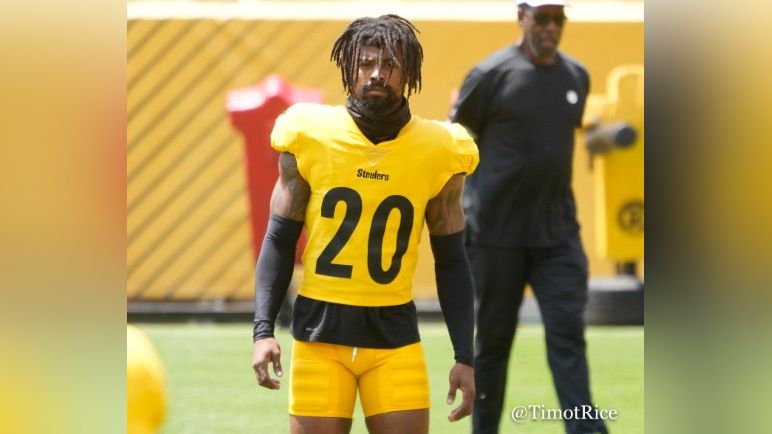 In my opinion the Steelers defensive MVP from last Sunday wasn’t Watt, Heyward or Fitzpatrick but cornerback Cameron Sutton.

Sutton, who signed a two-year, nine million extension this off-season, was used in a multitude of ways during Sunday’s victory against the Bills and he excelled in almost all of them.

This first play shows Sutton’s ability to recognize offensive concepts and make tackles in the open field. On this 2nd and short on Buffalo’s first drive, Sutton makes a great open field tackle on Stefon Diggs who is running a bubble route. This play allowed the Steelers to hold the Bills to three points following the big kickoff return to open the game.

Sutton was utilized in both the Nickel and Dime backer spots last Sunday and the Steelers frequently asked him to play the deep middle third or as the deep hole defender in a Tampa 2 coverage.

Sutton’s versatility meant the Steelers were comfortable with him playing that deep middle of the field allowing both Minkah Fitzpatrick and Terrell Edmunds to play underneath routes, robbing crossers and keeping eyes on the mobile Josh Allen.

On the last of these three clips we can see Sutton force an incompletion on a fourth and long play. The Steelers appear to be in a two deep zone, probably ‘Tampa 2’. The biggest weakness is the space in the deep middle of the field between the Safeties due to the width of their drops. Sutton is responsible for the deep middle hole and must run with anyone looking to attack that space. He does a great job of making a play on the ball forcing a turnover on downs.

One of my observations was the Bills’ willingness to throw at James Pierre when Sutton moved into the slot. I expect that coming into last week’s game, the Bills felt content with the Diggs – Sutton matchup. After the first quarter I think this changed and Diggs’ targets were reduced when Sutton was aligned over him.

To be clear; Diggs was double covered or bracketed using safety help on a number of plays, however there were occasions where Sutton played Diggs with no help to which he did a fine job.

On this flea flicker from the first quarter, Allen had great protection, allowing Diggs time to create space on a post corner route. Sutton played it perfectly, breaking up the pass and causing the incompletion.

I previously mentioned Sutton’s ability to make tackles in space. Although Diggs and others had receptions, Sutton was there to limit yards after the catch. One of the biggest plays of the game came on Buffalo’s failed fourth down and one attempt in the third quarter. Sutton’s receiver motioned into the backfield but he maintained his width, and when Allen pitched the ball back to Breida he made the tackle for a loss ensuring turnover on downs.

I look forward to how the Steelers continue to use Cam Sutton this season, and I would not be surprised to see him covering Hunter Renfrow in the slot this Sunday.