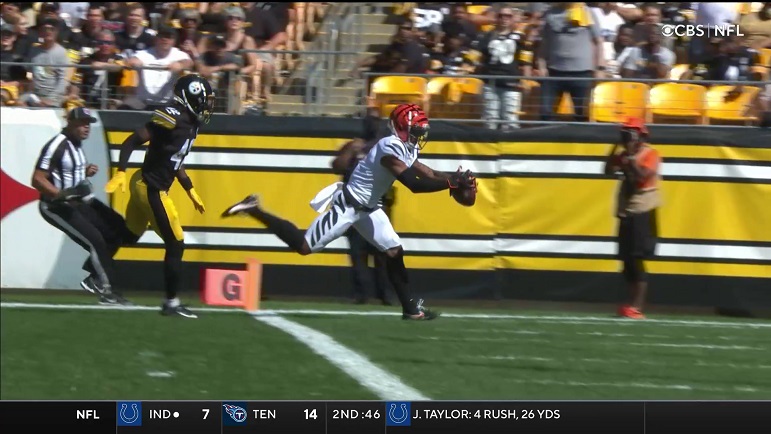 The Pittsburgh Steelers defense gave up a long touchdown pass to the Cincinnati Bengals right before halftime during Sunday’s loss at Heinz Field and that play wound up being a huge turning point in that contest.

On that touchdown pass play, Bengals quarterback Joe Burrow connected with rookie wide receiver Ja’Marr Chase deep down the left sideline for a 34-yard score Chase beat Steelers cornerback James Pierre on the play and after the game, the rookie talked about what he told Burrow he saw from Pierre that resulted in a deep shot being attempted.

“I was just telling him what I had seen from the corner, what I expected him to do,” Chase said “What I thought Joe should do on the situation. I was just giving him my thoughts and we were just talking about what we needed to do on certain routes.”

So, what did Chase see Pierre do exactly?

“I thought he [Pierre] was just opening as soon as I go to him. He was just opening his hips real late. And I was telling Joe it would be easy to take advantage of that,” Chase said. “It was a hell of a throw by Joe. He didn’t throw it behind, it wasn’t a jump ball. But out front of me. Forward. That’s what a receiver wants to make. An extended catch like I did. Perfect timing. That was a great play by Joe.”

Chase wasn’t the only player to comment on that touchdown after the game as the player who threw the football, Burrow, also was asked about it during his postgame press conference.

Burrow did, however, think that Pierre had decent coverage on that play.

“No, I thought the corner [James] Pierre had pretty good coverage,” Burrow said. “But Ja’Marr just out-physicaled him and got to the ball. That’s why you draft a guy like that: he makes those plays.”

In Pierre’s defense, he was playing bail technique in a Cover-1 defense and that has his body opened early off the snap. We don’t actually get to see when Pierre opens up fully to start running with Chase on the television version and perhaps that is what the rookie wide receiver is talking about. The throw was indeed great, and Chase made a great catch as well.

What is probably the most disturbing about this whole touchdown play is that Chase won and scored on that same exact play against the Minnesota Vikings back in Week 1. He also won deep and on the outside against the Chicago Bears in Week 2.

Here is the deep Chase TD in Week 1. Other side. #Steelers pic.twitter.com/pIXNQRS8ah

With time running down in the first half on Sunday, Pierre just can’t let himself get beat over the top for a touchdown. He did, however, and you can bet it was a huge learning experience for him.