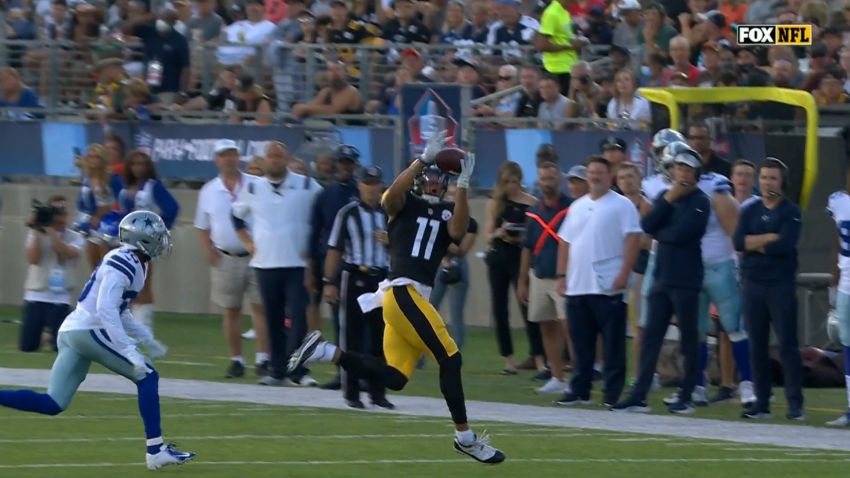 Sophomore slump — the two-word phrase used to exercise caution on follow-up seasons for rookies across every position in the NFL, despite its primary usage coming when discussing rookie quarterbacks coming off strong debuts, such as Justin Herbert.

In discussing players trying to avoid that slump, at the receiver position one of the top names mentioned is Chase Claypool, whose rookie season of 62 receptions, 873 yards, and nine touchdowns indicated future stardom and had him fourth in his class in the former two categories, and leading outright in the last one. Working through camp and the preseason with a new offensive coordinator and a gameplay designed to increase offensive production considerably, Claypool is prepared to not only avoid a slump, but take a significant step forward in his second season.

“I feel like if I regressed then I’ve done a disservice to myself. So I see a big leap going into the second year,” Claypool said. “Productivity, less MAs. I had a couple, like one a game is too many. So just executing every play and then just helping other guys get better, as well.”

The pieces Claypool is working with on the field in the offense remain unchanged. Diontae Johnson and JuJu Smith-Schuster are still listed as his fellow starters on the depth chart, all three challenging for a 1,000-yard season last year despite a decrease in passing yardage compared to prior (healthy) years. He also, for at least one more season, has Ben Roethlisberger as his quarterback, after the duo built a connection in 2020.

The variable is offensive coordinator Matt Canada, who brings a new type of offense to the team in replacing Randy Fichtner at the position. Over four preseason games, that has proven successful for Claypool and the Steelers: Claypool finished third on the team with 80 receiving yards across four catches, one of the two players he trailed was Johnson (103 yards, six catches), and the only player above either of them also made the team, fifth receiver Ray-Ray McCloud (108, eight).

Having those extra preseason games helped all of those receivers get adjusted to the shift, something denied Claypool as a rookie with the 2020 preseason canceled due to COVID-19. As an added bonus, the Steelers were one of only two NFL teams to get a fourth preseason game, by playing in the Hall of Fame Game.

“You have those four games to really get acclimated for games, for us to get acclimated, and you don’t have to warm up to things [during the regular season],” Claypool said.

The Steelers begin the 2021 regular season on Sunday, against the Buffalo Bills. That contest is in Buffalo, with a 1 p.m. start.