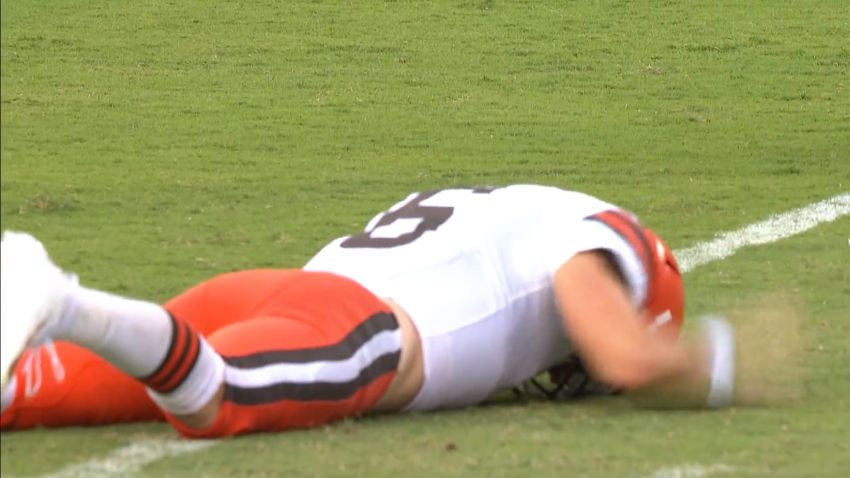 Three AFC North teams took the field yesterday, with the Baltimore Ravens set to play tonight. Two of them emerged victorious. The one of the three that did not was the Cleveland Browns, who had the defending AFC champion Kansas City Chiefs on the ropes for much of the game, before giving up the goose late.

After taking a 22-10 lead into the second half, Cleveland spent much of the final 30 minutes just trying to survive, before they were forced to come back. They were unable to, a Myles Garrett sack of Patrick Mahomes giving the Browns and Baker Mayfield the ball back with 2:49 to play. Five plays and 31 yards later, it ended in a 1st-and-10 interception.

Cleveland was trailing 33-29 at the time, and would have needed a touchdown to win. Mayfield just completed a 19-yard catch-and-run throw to running back Kareem Hunt to get to near midfield, with 1:16 to play at the time of the next snap, still with one timeout remaining.

And then the fourth-year quarterback made a mistake. After being forced to scramble, he threw awkwardly and across his body, looking for tight end Harrison Bryant, instead Mike Hughes in position to snag the ball out of the air, with 1:09 to play, and seal the come-from-behind victory for Kansas City.

While Mayfield finished the game having completed 21 of 28 pass attempts for 321 yards, leading the offense to four touchdown drives (all of them rushing touchdowns), it was the final offensive play of the game on which he focused in the aftermath.

Truthfully, that has been the refrain in the past. JuJu Smith-Schuster may have gotten lit up last season for saying “the Browns is the Browns” (even though not intended in the sentiment it was taken), but the Browns being the Browns has meant that they would find a way to lose in the end, no matter what came before.

Now, there’s no shame in losing to the Chiefs. Even a three-possession lead is not safe against Mahomes, Tyreek Hill, Travis Kelce, and company, especially not inside of Arrowhead Stadium. It would have been a very impressive win for them.

But that is now what they expect from themselves. There are no moral victories for these Browns any longer. They had the Chiefs on the road on the ropes. They are who they thought they were, and they let ‘em off the hook, to pay homage to the late Dennis Green.

We’re still waiting to see who the Browns are. Talentwise, perhaps even coaching-wise, they can be a damn good team. They had meaningful success last season, and have only gotten more talented since then. And Mayfield’s game was great, before that last throw. But it’s the last throw you have to make most of all.

You’ve just got to finish.