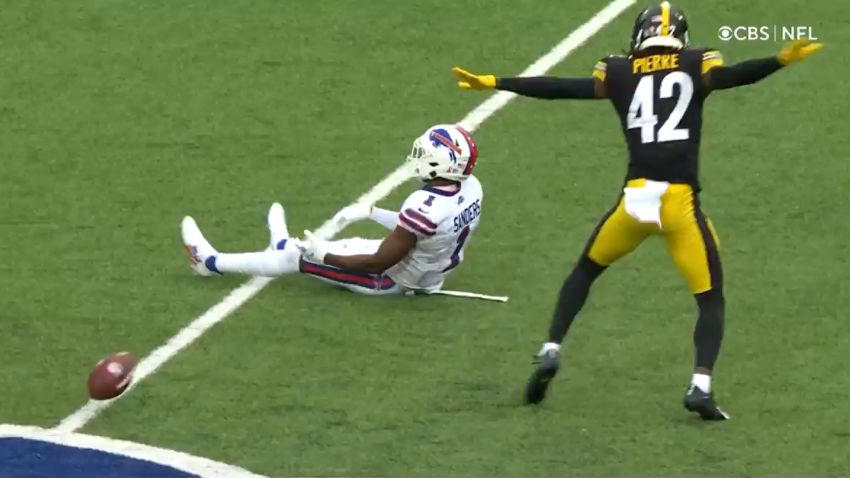 Reasoning: While he did not start as the team’s primary nickel defender, James Pierre did get on the field against the Buffalo Bills on Sunday as a regular part of their defense, and generally played well when he did.

It’s hard to categorize the state of the Steelers’ secondary right now. It is either unsettled or flexible. They used probably more than half a dozen different combinations in their nickel and dime defenses on Sunday against the Buffalo Bills, with multiple defenders spending time in multiple different positions, and seven different players being used in all.

Second-year cornerback James Pierre was one of those seven, though he was among those who did not move. He is limited to being an outside cornerback, which makes it more difficult to get him on the field, but they like him enough to move Cameron Sutton into the slot in order to accommodate him.

He played 31 snaps on defense, and recorded a key pass defensed on a critical play at one point in the game, a very solid play, along with four total tackles.

According to Pro Football Focus, he was targeted five times on 29 snaps in coverage, allowing three receptions for a total of 23 yards, with a long of nine yards. Though they graded him out as rather average, I certainly take those numbers.

In just one game, though, Pierre has already played more on defense in 2021 than he did all of last year in the regular season. If he averages a couple dozen snaps per game, that can be a good role for him, and perhaps the more he plays, and the more he shows the coaches, the more snaps he will earn.

Right now, though, the coaching staff seems to be interested in variety, with rookie defensive back Tre Norwood spending most of his time in the slot. They are even moving free safety Minkah Fitzpatrick into the slot for a fair chunk of snaps. But that’s another way to keep Sutton on the outside, unless they’re in dime.