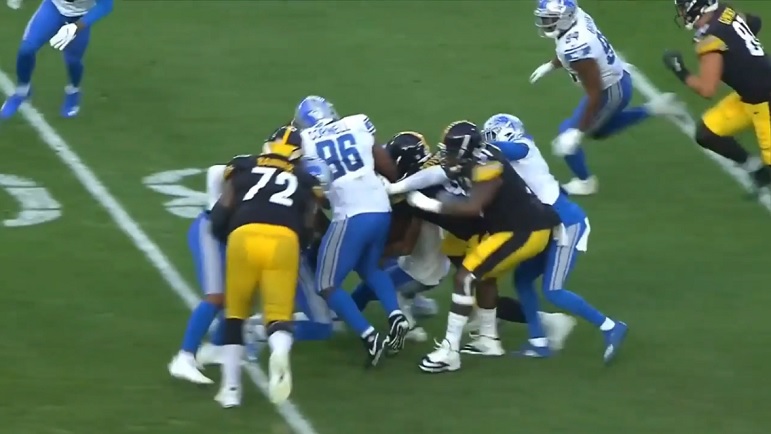 Saturday night was a great night for Pittsburgh Steelers tackle Zach Banner as he made his 2021 debut in the team’s preseason game against the Detroit Lions. Banner started at right tackle and played 12 snaps before being replaced by rookie tackle Dan Moore Jr.

After Saturday’s game, Banner, who missed most of the 2020 season with a torn ACL suffered in Week 1, was asked to comment on what it was like being back out there on the field again in a game and in front of a lot of fans.

“It’s been almost a year since the injury, and the only thing that put me at ease was the fans,” Banner said. “I don’t say that to burst their bubble, I say that to let them know how much they truly mean to us and myself. Coming out of the tunnel, hearing them roar, and had the two great series because of it.”

Steelers head coach Mike Tomlin also was asked about the play of the starting offensive line after the game, and he noted that he was pleased with the overall aggressiveness the unit showed.

“I just thought in general, I thought that they really finished,” Tomlin said. “It seemed like our pile was falling in the direction that we desire for it to fall. I thought guys were finishing with great effort, there were examples of that. You saw 79 [Rashaad Coward] down the field finishing the block. You saw 53 [Kendrick Green] on several occasions really finishing. Hopefully that’s a catalyst for us as we move forward.”

According to Pro Football Focus, the Steelers’ starting five offensive linemen gave up six total pressures against the Lions, with starting right tackle Chukwuma Okorafor being charged with five of those. Rookie center Kendrick Green was charged with the other one. Banner had a clean sheet Saturday night but played the least of the starting five. Okorafor, Green and left guard Kevin Dotson played 48 total snaps against the Lions.

The Steelers starting offensive line will likely get some limited work in the team’s Friday preseason finale against the Carolina Panthers, and hopefully the unit can continue to gel more in that contest and in the remaining practices the team will have before their Week 1 road game against the Buffalo Bills, which will take place three weeks from today.