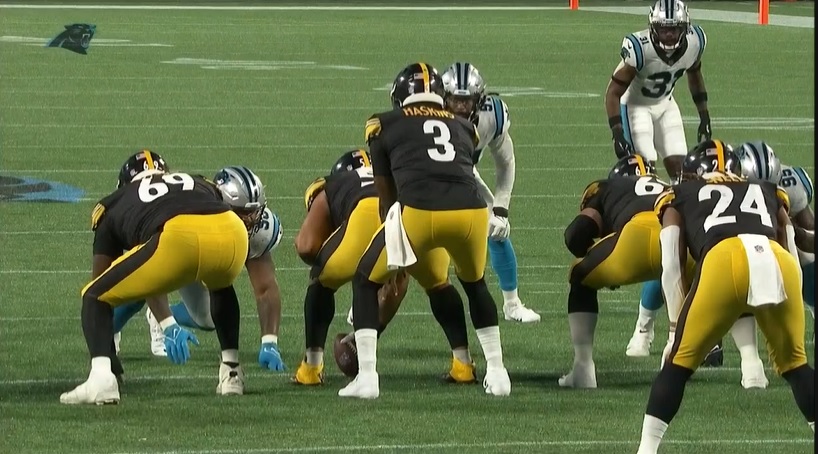 1. Decent DL Deep – Boy, that game was ugly, huh? Let’s start with a positive note. The defensive line depth looked pretty good in this game.  Chris Wormley, Isaiah Buggs and Carlos Davis were all making plays and getting pressure something none of them really did last year.  The combined for 8 tackles and a quarterback hit. Isaiahh Loudermilk played well late and had 5 tackles and a sack. Made a nice stop on the edge fighting through too blocks as well. I feel better about this depth now especially if Tuitt will miss some time.

2. Solidifying Their Spots – Two players that I think solidified their roster spot were Jamir Jones and Buddy Johnson. A key for both of these players will be contributing on special teams and both made multiple tackles in this game. Both played on punt and kick cover and had a tackle on each. Jones also added to his team leading QB hits he had eight tackles and a sack.

3. Pierre Making a Push – He is already going to have a large part in this defense this year but it seems like he sees an opening to take the right corner spot and permanently push Cam Sutton back to the nickel corner full time. I think he loves playing close to the line of scrimmage and he plays short are passes to his side so well. Getting downhill quickly and making consistent tackles.

4. I Don’t Want It, You Take It Part 1 – The final preseason game is an opportunity for man to earn their spot on the 53. That was not the case in this game. Let’s start with the #3 QB position. A chance to make a statement from Dwayne Haskins and all I heard was crickets.  He was bad from the start. His accuracy on short throws was all over the place leading to his lone interception. Sure he can throw it hard but accuracy is more important. Josh Dobbs could have taken control as well but he didn’t look good either.

5. The Surprise Player to Make the 53 Will Be … – Mark Gilbert. Kevin Colbert and his staff have done a nice job finding gems in the undrafted pool and may have found another. I think Gilbert is this year’s Pierre and could be used in the same way as he is developed.  He has 5 tackles and two pass breakups in the preseason and has been used on, I believe, all four special team units including as a gunner on punts. I think there is potential there and could make the 53 coming out of camp.

6. Boswell Missed and That is Good – When he is healthy Chris Boswell is really good, like almost automatic. He missed and extra point in this game and I saw it as a good thing.  He got the bad kick out his system but it could leave a bad taste in his mouth. Now going into the season he’ll be more focused and may not miss a kick all year.  (knock on wood)

7. I Don’t Want It, You Take It Part 2 – Let’s look at the #5 wide receiver spot. Ray-Ray McCloud is the incumbent but after a good start last year he tailed off at the end. In this game he possibly had a drop (the DB may have gotten a finger on it), didn’t get his feet in on a well thrown ball by Haskins and then and was called for an offensive pass interference penalty. He did finish with a team high 61 yards and TD. Mathew Sexton had a chance to push McCloud or at least a push for the practice squad but two muffed punts and likely ended his chance.  I had high hopes for McCloud this year but they’ll be watching the waiver wire for another return man.

8. Where’d He Go? – I have to watch the game again but it looked like the starting offensive line in this game was having trouble with the stunts and twist of the defensive line. That type of communication and timing to pass off pass rushers should improve with time with the young lineman but that could spell trouble for Ben Roethlisberger in the early part of his season especially week one.

9. The Least Talked About Position – Easily it’s the long snapper. They are only usually talked about when they do something bad.  Except at Steelers Depot where there are articles and podcast conversation about them.  And with good reason.  I think the Steeler have a new one.  Christian Kuntz has not only done well on snaps but he is covering punts as well.  He had at least 2, maybe three tackles on punts. That may be a new league record for a long snapper for tackles in a game.

10. Time to Wheel and Deal – The final cuts are coming and the every team out there will be looking to solidify the back end of the roster. For the Steelers offense, I think they could look for a veteran center to back up Kendrick Green and maybe a #5WR/returner. On defense, slot corner, safety and inside linebacker are possibilities. Expect a trade or two to try to regain some draft picks. Some names that could bring back late round picks include Haskins, Benny Snell, Robert Spillane, Jordan Berry and McCloud.