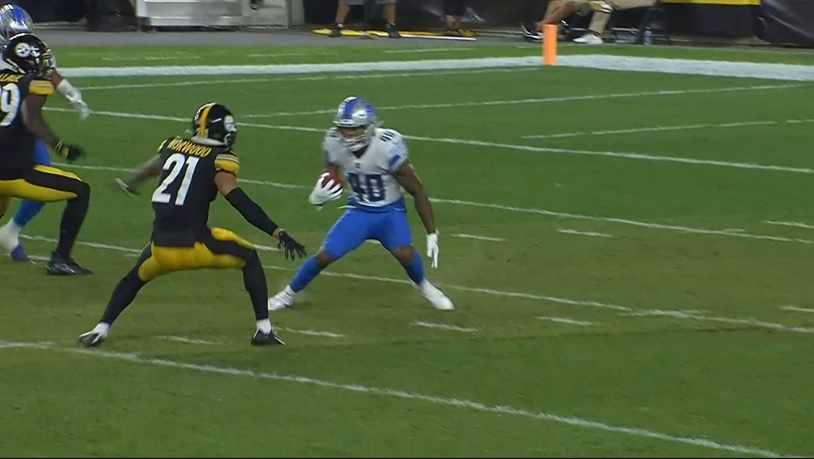 1. Harris Ready to Answer the Bell – There has been some discussion this preseason about who the backup running backs will be and barring an injury I don’t think it will matter all that much. I feel like Najee Harris is going to get a Le’Veon Bell type workload and that means the others won’t see the field.  In Bell’s three best seasons he played 83, 72 and 85 percent of the plays. The backup RB’s in those seasons: LeGarrette Blount (65), DeAngelo Williams (98) and James Conner (32) averaged 65 carries for the season.  That’s 4 per game.

2. The Red Zone is on Freier – You have to give the kid credit. He never dropped a pass in the red zone in college.  Per Alex Kozora’s stellar reports we know he had the highest catch percentage in camp. Ben Roethlisberger put two bullets on him in the red zone and he snatched them both. Just another weapon for the offense where teams need it most.  Just need to get him to keep improving as a blocker and they could have a big time tight end.

3. Are You Ready? Ben Ready – We got our first look at Ben Roethlisberger in game setting in the new-ish offense and he looked good. There was zip on the ball, the placement was good and he even looked like Ben of old avoiding a sack to extend the play to get ball downfield. It’s a long season and we’ll see how he reacts over the course of the season but this was a strong showing against a below average team.

4. First Look Up Front – The offensive line was totally revamped this year and we finally got a look at the expected starting five. Across the board overall it was a good group showing.  Zach Banner saw his first action and looked good and moved smoothly while Chukwuma Okorafor performed better.  Kendrick Green worked well to the second level and the interior as a whole was showing promise.  A like the effort by the whole offensive line group to work downfield as well to try to get extra blocks. Saw several players hustling playing to the whistle.

5. Controlled Coverage – The kick coverage was a positive in this game. It starts with Chris Boswell controlling the depth of the kick to give the coverage team a chance to make a play. I liked the way the players covering the kick coming under control in order to make the tackle instead of running full speed at the ball out of control. They’re also getting contributions by many players. I counted a least nine different players in on tackles.

6. Gent and a Scholar – We knew there was a lot of work to be done with Zach Gentry. He was new to the tight end position and was raw coming in so the question was would he be able to learn the position and be effective.  From what I have seen in the preseason he if finally ready to earn his roster spot. His run blocking in much improved showing strength and the ability to sustain. He was solid in pass protection as well. He was virtually even with Kevin Rader in snaps coming into this game and I think he has performed better.

7. Show and Terrell – His fifth year option was denied making this season a contract year and for many players that is the incentive needed to have a big year. Terrell Edmunds could be on the verge of being an impact player particularly in the passing game.  They move him around a lot and often have him near the line of scrimmage and he has shown an uptick in aggressiveness when blitzing or filling gaps.  He could finally be ready to show why the Steelers took him in the first round.

8. Back In the Mix – In last year’s offense the running back was the forgotten man in the passing game. The RB’s has 60 receptions last year and compared to previous seasons that number was way down.  The previous years had 93 in 2019, 88 in 2018 and 89 in 2017 (Bell had 85 of those).  Through 3 preseason game the RB’s have 16 receptions on 19 targets for 191 yards.  That pace would put them back in the 90 reception range and Harris and Anthony McFarland could do some damage in space.

9. Washington Still Wanted Here – With the recent news of James Washington not being happy with how he was being used I was expecting that he would get targeted early and often (for him) in this game. He finished with 4 targets and 3 receptions including a red zone fade target after 2 targets and zero reception in the first two games. I understand he wants to play more and I want him to play more. He’s too valuable to the team to be traded and he’ll probably get a good payday regardless next year. It’s hard to keep everybody happy but I hope he gets his opportunities.

10. Allen Making His Marc – Admittedly, I was not a fan of the switch a safety to linebacker move but I may have been wrong on this one. Marcus Allen seems to be having to think less and just is reacting now and he has played well.  He has 8 tackles, 2 pass breakups and half a sack in the preseason and I think he had a tackle on punt coverage in this game as well. He is on the right track now and the better the depth, the better the team can be.