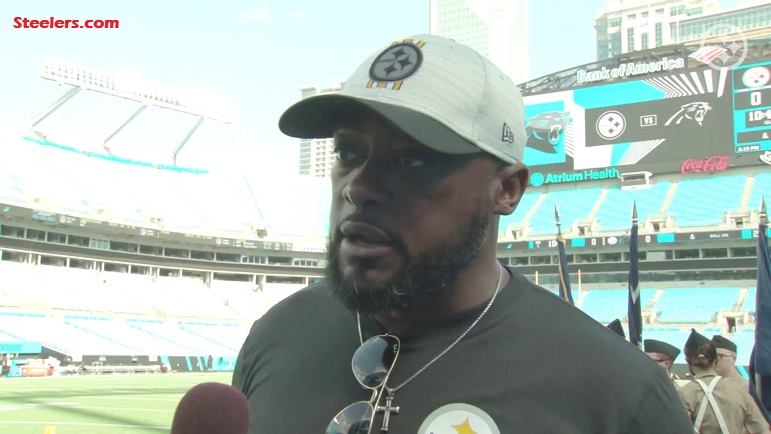 The Pittsburgh Steelers will start quarterback Dwayne Haskins against the Carolina Panthers Friday night in the team’s 2021 preseason finale and the former first-round draft pick out of Ohio State will have some quality and experienced receiver help on the field with him at least early in the contest.

Ahead of the Steelers Friday night road game against the Panthers, head coach Mike Tomlin told Missi Mathews that Haskins will have wide receivers Chase Claypool, James Washington, and Ray-Ray McCloud on the field with to start the game.

“You know, we’re going to surround him [Haskins] with some quality receivers,” Tomlin told Matthews. “[Chase] Claypool didn’t play last week; he’ll get an opportunity. James Washington missed some time through this process with an injury as well. He will also. Ray-Ray McCloud [also]. Those would be the primary receivers that he’s working with.”

Claypool missed the Steelers third preseason game against the Detroit Lions last Saturday night with an ankle so it’s good to hear he’s back healthy enough to play. It will be interesting to see how many series Claypool, Washington and McCloud all play Friday night.

As for the Steelers starting running back Friday night, Tomlin confirmed once again that it will be Benny Snell Jr., who has yet to play so far during the preseason due to an undisclosed injury.

“Benny Snell has missed some time due to injury,” Tomlin told Matthews. “We know he’s varsity and so he’ll be the feature runner.”

How much will Haskins play Friday night before giving way to quarterback Joshua Dobbs?

“You know, I’ll know when I’m there,” Tomlin said when asked about Haskins playing time Friday night. “We just want to give him an opportunity. He’s a new guy to us. And so we’re going to get him more exposure. We want to get more exposure to him to gain understanding. And so we’ll know when we get there.”