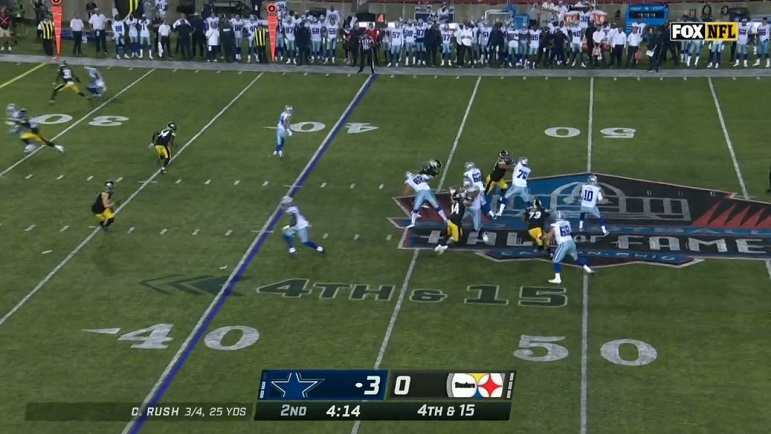 On Tuesday, Steelers head coach Mike Tomlin was asked if he liked the way the defensive front unit played overall against the Cowboys and his response wasn’t overly surprising.

“I did,” Tomlin said. “And that’s what I mean when I say I focus my energies on the guys that are playing. Man, one man’s misfortune is another man’s opportunity. We got some quality young players that are battling for positions that want to display growth. You shouldn’t assume that the guys are the same as they were a year ago.”

Unprovoked, Tomlin went on to give an attaboy to Steelers second year defensive tackle Carlos Davis for his play last Thursday night against the Cowboys.

“I’ve been pleased with the growth and development of Carlos Davis, for example,” Tomlin said. “And so that’s a guy that’s had some elevated varsity reps, if you will, because of the lack of participation in some of the more veteran guys and man, I liked some of the things that he’s displayed. Man, he ran a quality game and had a quarterback hit on an interception by Donovan [Stiner] on a third-down play in the Hall of Fame Game. We talk about the interception, but rush and coverage works together and it’s a component of good collective defensive play. And that’s just an example of growth in that specific area.”

While Tomlin referenced the play that included the interception by safety Donavan Stiner as the one that Davis ran that game on, it actually appeared to have had happened during the 4th and 15 play later in the first half that resulted in a catch and fumble. You can see that play below.

Davis, the Steelers’ seventh-round draft pick in 2020, is battling for a roster spot this year during training camp and the preseason, so it’s important that the Nebraska product stay healthy and productive theses next few weeks. The same goes for the rest of the young defensive front players all vying for roster spots these next few weeks. Several of those other young players such as outside linebackers Quincy Roche, Jamir Jones, Isaiah Buggs and Isaiahh Loudermilk seemed to play well against the Cowboys last Thursday night.

The Steelers will play their second preseason game of 2021 Thursday night on the road against the Philadelphia Eagles, and once again, veteran players such as Heyward, Tuitt, Alualu, and Watt aren’t likely to see any action in that contest. In short, Thursday night should be another opportunity for those younger defensive front players to get a lot of valuable snaps and Tomlin will be watching them.

“I thought that group did a nice job and I’m excited about watching them take a step this week,” Tomlin said on Tuesday.