What started as a mysterious absence from practice, with added drama fueled by a bizarre rumor, is now becoming clear. Pittsburgh Steelers guard Kevin Dotson, who was expected to be a starter in his second year, has been sidelined with an ankle injury, as initially reported by ESPN’s Brooke Pryor three days ago. In a media session yesterday, Dotson himself confirmed that it was this injury that has delayed his training camp debut. He is now recovered and able to fully participate in team drills. During the Q&A, Dotson also revealed that he had undergone two injections with PRP to speed his healing.

Platelet rich plasma is plasma with an increased number of platelets which is produced with the patient’s own blood. Plasma is the liquid portion of blood, made primarily of proteins and water. Platelets help with clotting and also contain proteins called growth factors which are important in the healing of injuries. Typically, a few tubes of blood are drawn from the patient and then spun in a centrifuge to separate the components and concentrate the platelets in the serum by anywhere from 5-10 times normal. The red and white blood cells are discarded. 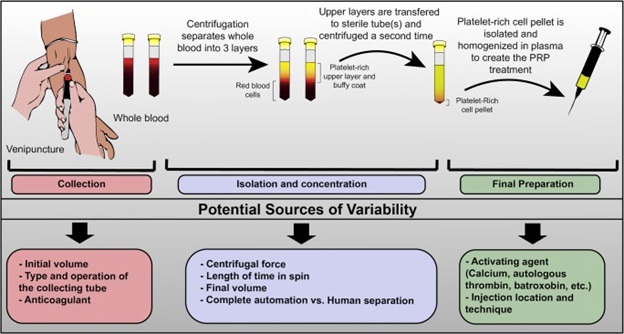 HOW DOES PRP WORK?

PRP is injected into injured or diseased tissue to improve or accelerate healing. This is often done with the guidance of ultrasound to give the surgeon a view of the joint structures. 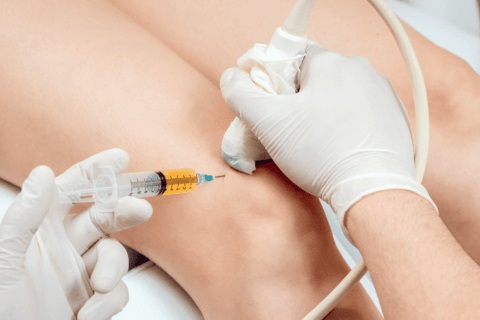 PRP can be used for chronic or acute injuries, most commonly tendon and ligament injuries but also for soft tissue injuries, particularly in the areas of joints that receive lower blood flow.

NSAIDs, which are commonly used for sports injuries, should be held for at least a few days prior to injection so that the inflammatory response is not suppressed. The patient will likely experience swelling and soreness for 3-7 days after the injection and mobility is permitted but strenuous activity must be avoided during recovery.

WHAT IS PRP USED FOR?

PRP has been in use for over 20 years. Although it is not FDA approved, it is considered safe and can be legally offered as ‘off-label’ in the USA for a variety of musculoskeletal indications.

PRP is commonly used for chronic tendinitis, such as tennis elbow or golfer’s elbow but can also be used to treat acute injuries. In the lower leg, the more frequent uses are patellar tendonitis, hamstring and quad injuries, knee ligament injuries, plantar fasciitis, Achilles tendonitis, and ankle sprains. Another application is to improve surgical healing, and PRP can be injected during or after surgery.

DOES PRP MAKE A DIFFERENCE?

Well, we don’t really know for sure.  Most medical studies don’t have large enough patient volume to show a statistically significant benefit, but many suggest one. Steelers team doctor James Bradley looked at 69 players with acute grade 2 hamstring injuries on a single NFL team (not mentioned in the published paper but we can guess) from 2009 to 2018.

A 2018 study compared 10 Rugby Union players in Sydney, Australia who received PRP for treatment of significant ankle sprain to 11 players who underwent typical treatment only. The authors found the following:

The jury is still out from a scientific standpoint, but many sports medicine doctors and trainers support the use of PRP, and many famous professional athletes believe in the power of PRP to accelerate healing. Steelers fans will all remember Hines Ward’s MCL injury leading up to Super Bowl XLIII and how desperately he worked to recover in time to play. He underwent PRP injections and slept in a hyperbaric tent to improve healing and oxygenation to his tissues. Obviously, it got him back in time to face the Cardinals and help earn his team win. Rumor has it that newly minted Hall of Famer Troy Polamalu also used PRP to get to that same Super Bowl. After suffering a calf strain in pregame warmups, he barely made on the field in time to start against the Chargers in the Divisional round game.  There are multiple reports that he underwent PRP injection after that game to speed up his healing, and anyone who remembers his INT of Joe Flacco and the 40-yard return for a TD that sealed the Steelers AFC Championship might agree about the powers of PRP.

We don’t have much detail on the nature of Kevin Dotson’s ankle injury regarding severity or type…or whether the PRP injections helped him rejoin his teammates on the practice field faster. But as head coach Mike Tomlin said the other day, it’s good to have him back out there.