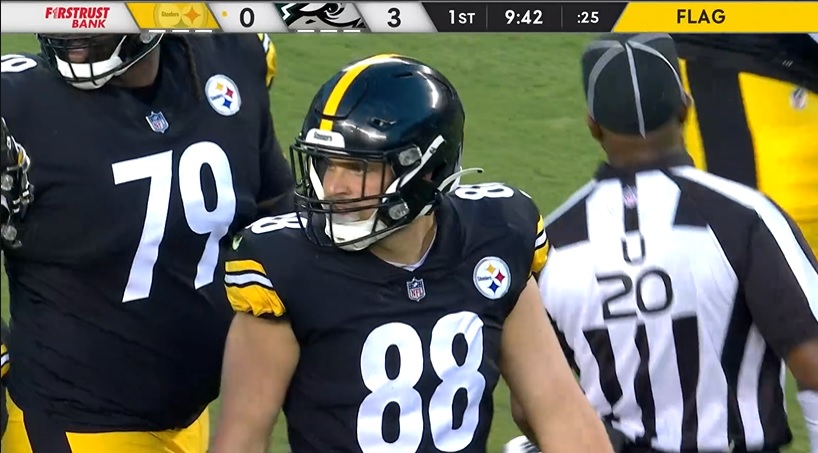 The good news is Pat Freiermuth got to check a major box tonight: He can say he’s played in a NFL game. The bad news is he probably wishes his first professional snap went a little better than it did. On his first play tonight, he was called for holding that negated a solid Najee Harris run.

Freiermuth discussed that moment with reporters following the Steelers’ 24-16 win over the Philadelphia Eagles.

“The first play of the game when I went in there,” he told reporters after the game via a team transcript. “Brandon Graham was in there. I was on the backside of outside zone and he put me on the ground. Got a holding call but definitely don’t want that to happen. It’s a learning experience and I’m happy that it happened in the preseason and not an actual game.”

(Ed Note: It was actually Derek Barnett he held, not Graham).

That was one of several penalties by the offense early in the game, putting them in a 13-point hole in the first half. Take a look at the play.

Freiermuth couldn’t cut off Barnett on the backside of the run and grabbed his jersey and pulled him down in a desperation attempt. And the refs tagged him for it.

The most important thing is that Freiermuth was available after missing the Hall of Fame Game due to a minor shoulder injury suffered in the team’s final practice leading up to their preseason opener. On the surface, Freiermuth’s debut was quiet, called for that hold and catching one pass for six yards on his lone target, but he finally has in-stadium tape to watch and learn from.

That was his takeaway from Thursday night’s game.

“It was awesome to get out here, just kind of see what the NFL experience was like,” he said. “There were definitely some ‘welcome to the league’ moments blocking big dudes and stuff like that, just like in college. I was happy to get out there and play as long as I did. Get that experience.

And to be a little fair to him, Freiermuth wasn’t going against a rookie on that play. He was facing Barnett, a four-year vet and former first round pick. Sure, once the regular season starts, he’ll be facing guys like that every week But if there’s a time to have a “welcome to the league” moment, it’s in the preseason. And hopefully those issues will be minimized when the games start counting and they’re no longer teaching moments.

We’ll have a full review of Freiermuth’s debut later this week.