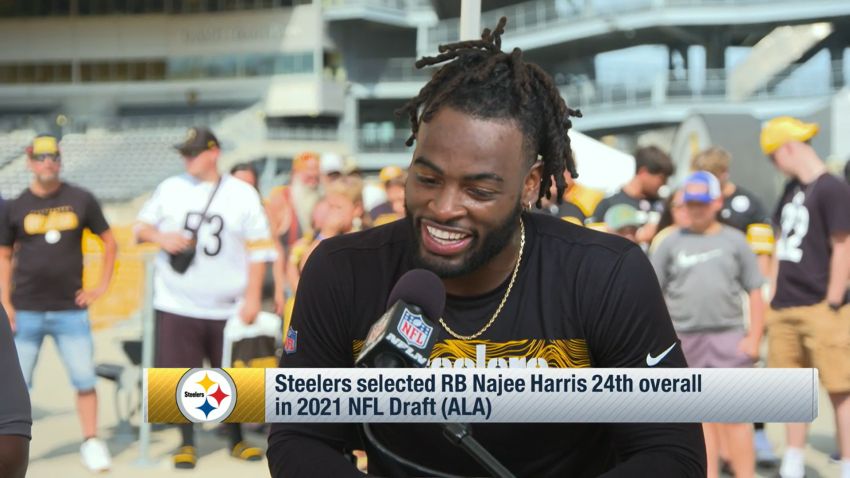 When you use a first-round pick on a player, you’re doing more than just bringing in a new athlete to put on the field. You’re potentially adding somebody who will represent your organization for years to come, in all aspects of his life.

While debates will continue over whether or not the Pittsburgh Steelers were wise to draft a running back in the first round, that conversation changes when you look deeper into who they drafted, which is Najee Harris out of Alabama, and how he carries himself.

The rookie was on the NFL Network earlier today from training camp, and it’s obvious that he is extremely comfortable in his own skin, and in the NFL environment. This is clearly not somebody who is going to be a shrinking violet in the face of attention or pressure. In fact, he doesn’t feel the weight on his shoulders at all—at least, he doesn’t feel it as pressure.

“I feel like people always say, ‘oh, you’ve got so much pressure on you’. I’m like, ‘man, it’s not pressure, I see it as opportunity’”, he said. “It’s an opportunity for me that other people may not have. So I embrace all of it. I love the challenges that people give for me”.

“We were last in the run game, so I love the challenge of, drafting a running back and people saying, ‘oh, don’t draft a running back’”, he continued. “To overcome all of this and to prove people wrong, it’s a blessing. It’s an opportunity. That’s how I see it. No pressure, at all”.

The Steelers did, indeed, finish last in the NFL last season in total rushing offense. That obviously played a role in their decision to draft Harris, though one gets the sense that they view him as a player who transcends the position—not just in the sense of also being able to catch, but in who he is and what he brings to a locker room, and to the organization.

That is very much in line with the work ethic we’ve come to understand from him. He’s been as dedicated to the game as any rookie I can ever recall coming in, something that has come naturally for him since long before he was in the NFL, or even at Alabama.

This is just Najee. It’s not pressure. It’s a blessing. It’s an opportunity. And to hear him tell it, it’s easy to believe.