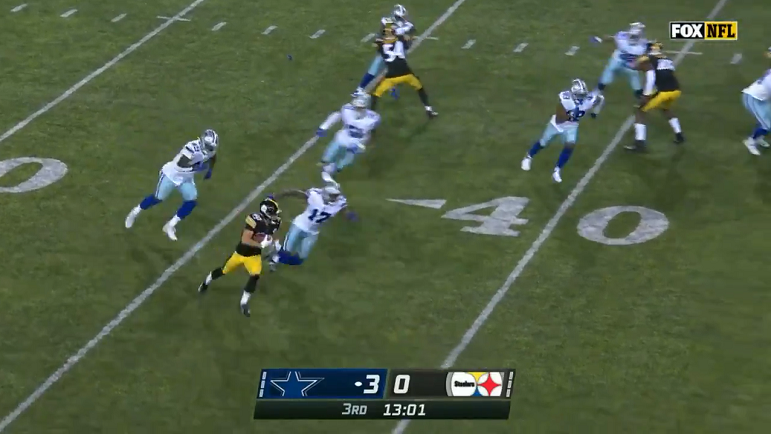 Pittsburgh Steelers head coach Mike Tomlin made it clear on Wednesday that young players such as wide receiver Mathew Sexton still have a shot making the team’s 53-man roster with a solid performance in the team’s Friday night preseason finale against the Carolina Panthers.

“That’s the beauty of this process,” Tomlin said when asked about Sexton on Wednesday. “We were studying the history of the series this morning in the team meeting and talking about what a platform this game is for guys to springboard to success. We talked about a guy about ten years ago named Stefan Logan that nobody knew and really didn’t have a position, but he kept adding in the return game. He had about an 80-yard punt return in the Carolina preseason game and really ran his way onto the football team. Mat’s had some moments. He’ll have an opportunity to put an exclamation point on his work like a lot of guys will.”

In case you forgot, Logan was an undrafted free agent out of South Dakota in 2007. After failing to make it with the Miami Dolphins, he moved up north to play in the CFL for a season, then got an opportunity with the Steelers in 2009. In the Steelers’ third preseason game that year, Logan returned four kickoffs, averaging 39 yards, with a long of 60. He also averaged 12 yards on four punt returns with a long of 18. The following week in the Steelers preseason finale against the Panthers, Logan finally broke off a punt return for an 80-yard touchdown and he wound up making the 53-man roster because of that.

In the Steelers first three preseason games this year, Sexton has retuned three punts for 88 yards with a long of 47 yards. He has yet to return a kickoff, however, so it will be interesting to see if he gets an opportunity to do that Friday night against the Panthers..

Currently, Steelers wide receiver Ray-Ray McCloud is poised to be the team’s punt and kickoff returner again in 2021 after making the team last season.

During his college career at Eastern Michigan, Sexton returned 21 kickoffs for 353 yards and two punts for 77 yards and a touchdown.