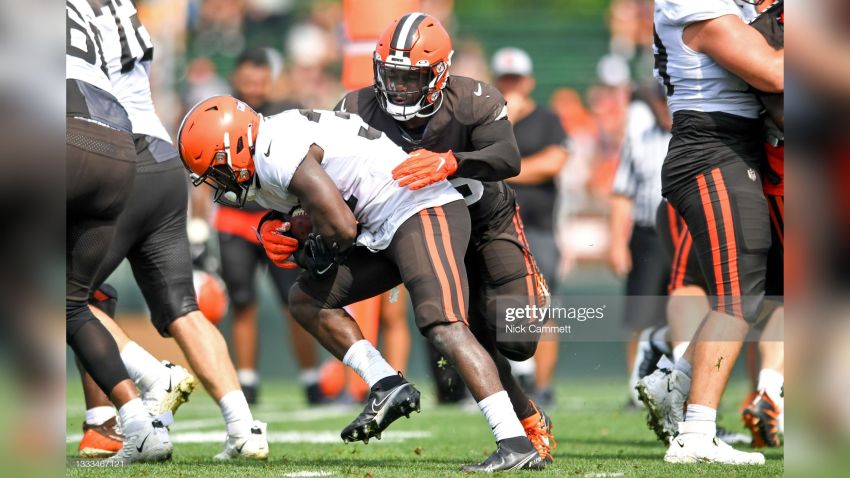 There are few things that teams like—some more than others—than claiming that they were able to draft players on whom they had first-round grades, but to do so after the first round. The Cleveland Browns, for example, believe that they landed two players with first-round talent this year, first selecting cornerback Greg Newsome II in the actual first round, and then linebacker Jeremiah Owusu-Koramoah in the second.

Both of them made their NFL debut for the Browns over the weekend, and both played well, but JOK, in particular, was active. He finished with a game-high eight tackles, including a sack for a five-yard loss, in addition to two other tackles for loss.

“If you watched it live and then even watching it on tape, he did make splash plays. He made good tackles along the sideline. He made a nice play on that screen”, Browns head coach Kevin Stefanski said of his young linebacker after the game.

“He needs to clean up his eye progression, and he understands that and the coaches are working very hard”, he added, noting the work the rookie has left. “To really play fast in this league, it is when you are not thinking. I think he is getting there. With a lot of work, I think he will get there. Overall, he understands there is plenty of work to be done”.

Owusu-Koramoah, who at one point in the game was clocked at 14.79 miles per hour, has elite speed, but I think there were those who questioned how and where they would use him. The Browns have had a plan about that since before they landed him.

As much as they may like him, though, he’s not being handed a starting job. Mack Wilson and Anthony Walker, the latter a free agent pickup, are listed as the starters. In fact, he’s listed third-string behind Malcolm Smith and Jacob Phillips.

“All of these guys as we continue to progress through training camp, we will continue to meet as coaches and discuss those type of things”, Stefanski said about the possibility of him seeing more first-team snaps. “With all of our rookies, as you know, we bring them up all on different timeframes. Some guys are ready for more. Some guys are not. We will make that on a case-by-case basis”.

Owusu-Koramoah was just one part of a major defensive overhaul for the Browns this offseason, which also included the additions of Jadeveon Clowney, John Johnson III, and Troy Hill. Add in the return from injury for Greedy Williams and 2020 second-round pick Grant Delpit, and that’s a lot of added firepower for a unit that really underwhelmed a year ago in comparison to their offense.