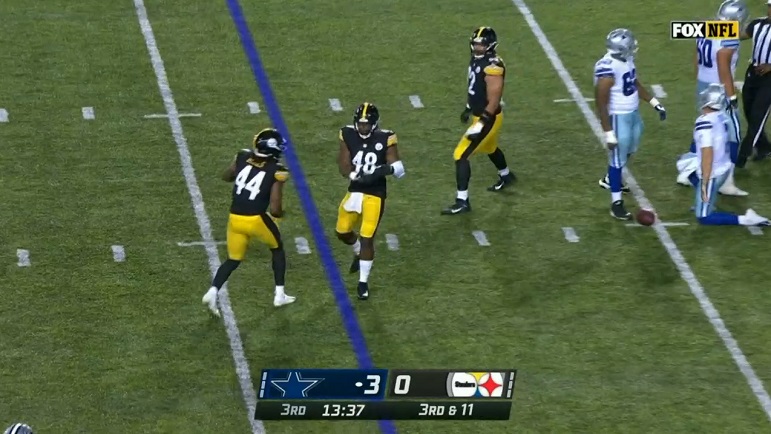 Against the Dallas Cowboys in the Thursday night Hall of Fame game, not only did starting Pittsburgh Steelers outside linebacker Alex Highsmith play well, the team’s backups on the depth chart at the position looked good as well. Those backups behind Highsmith included Cassius Marsh, Jamir Jones, and rookie draft pick Quincy Roche. After Saturday’s training camp practice, Steelers defensive coordinator Keith Butler was asked to give his thoughts on what he’s seen out of the team’s backup outside linebackers so far.

“Jamir [Jones] is playing well for us,” Butler said of the former undrafted free agent out of Notre Dame. “I think Quincy [Roche] has still got a lot to learn. I don’t think he’s played any type of linebacker before so there’s a lot to learn for him in that situation, but the other guys have played a little bit of outside linebacker. I like the competition we’ve got.”

Butler when on to describe how the team will likely go about deciding which outside linebackers they’ll keep on their 53-man roster behind T.J. Watt, Highsmith and Melvin Ingram to start the regular season.

“Here’s what’s going to happen: Danny Smith is going to be the one to choose the backups because if they can play special teams, then they will play for Danny Smith and he’ll have the first dibs on them,” Butler said on Saturday. “Not us. So, we’ll express our opinions on who we like, who we don’t, but it always comes down to who can play special teams and who can’t.”

As we noted in our snap counts from the Thursday preseason game, Jones played 39 defensive snaps against the Cowboys and another 15 on special teams. As for Roche, he played 26 total defensive snaps Thursday night in Canton, OH and another 15 on special teams. While neither player registered a special teams tackle against the Cowboys, Roche had a sack and a quarterback hit in the game while Jones was credited with three quarterback hits.