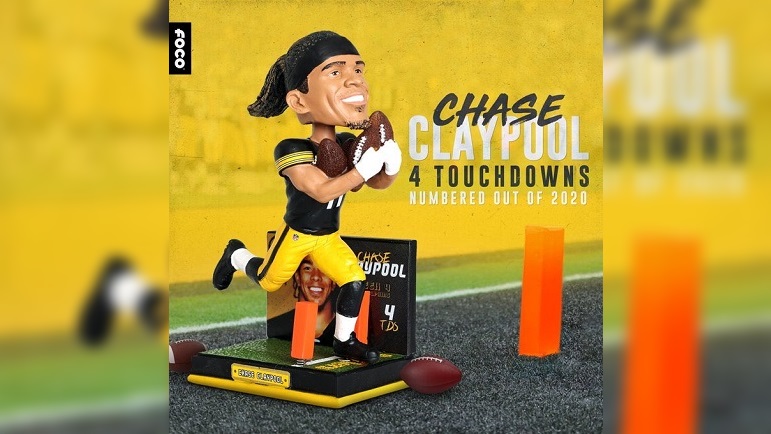 FOCO recently released a limited-edition bobblehead of Pittsburgh Steelers wide receiver Chase Claypool that his hyper focused on his four-touchdown game he had as a rookie against the Philadelphia Eagles in 2020.

In that game against the Eagles last season, Claypool became the first rookie in Steelers history to score four touchdowns in a game since wide receiver Roy Jefferson accomplished the feat when he caught four touchdown passes against the Atlanta Falcons on Nov. 3, 1968.

Claypool was the third player in Steelers franchise history to score four touchdowns in a game.

Below are all four of Claypool’s touchdowns against the Eagles. He also became the first Steelers rookie with a receiving and rushing touchdown in the same game since Hall of Fame running back Franco Harris did it against the Buffalo Bills in 1972.

Claypool, who was selected by the Steelers in the second round of the 2020 NFL Draft out of Notre Dame, had a tremendous rookie season. In total, he registered 62 receptions for 873 yards and nine touchdowns as a rookie in addition to having two more touchdowns on rushing attempts. Claypool also led the NFL in pass interference penalty yardage drawn as a rookie. Claypool had 14 explosive play receptions during his rookie season, and he played nearly 700 total offensive snaps and anther 124 on special teams.

You can purchase the new Claypool bobblehead on the FOCO website for $50 and the link to the offering is below.