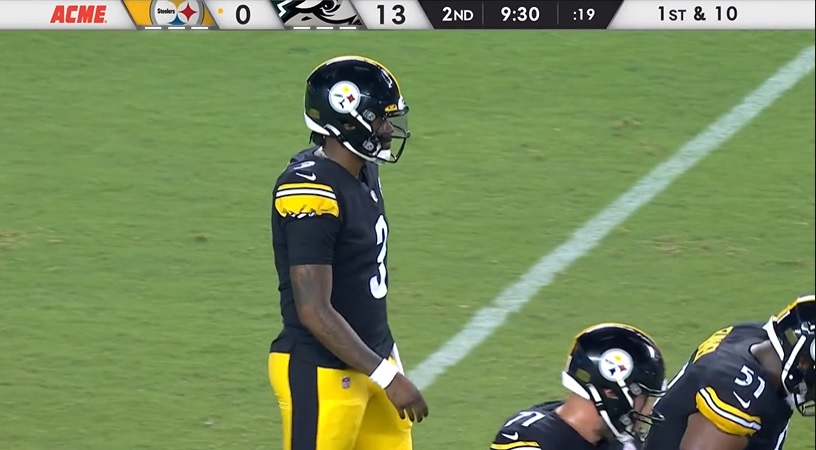 QB Dwayne Haskins received a lot of flak after the Hall of Fame Game against the Cowboys last week for his tendency to attempt mainly short passes near the line of scrimmage as fellow Steelers Depot contributor Daniel Kitchen pointed out. In Kitchen’s post, Haskins revealed that he received the nickname “Check Down” from HC Mike Tomlin due to his inability to complete any deep passes last week. Tomlin did recognize that Haskins was efficient as a passer, taking what the defense gave him and hitting his open receiver on multiple occasions, keeping the chains moving on a couple scoring drives.

Haskins finished the first preseason game completing 8 of 13 passes for 54 yards with no TDs or INTs. While not a bad performance for his first game action in the Black and Gold, he did get criticized for his meager 4.1 yard per pass attempt on the night, mainly taking the check down options in the flat or close to the LOS with only one pass traveling more than 20 yards downfield that was incomplete.

In his second preseason action against the Philadelphia Eagles, Haskins ended up completing 16 of 22 passes on the night for 161 yards and a TD. He brought his average yards per attempt up from 4.1 to 7.3, still making the smart check down throws based on what coverage was giving him, but also took his shots down the field when he had a receiver running open.

Like in the first game against the Cowboys, we got to see Haskins make several throws while on the run working out of the pocket. On this first throw, we see Haskins execute the play action boot leg to the right, finding #26 Anthony McFarland Jr. out of the backfield for the easy completion to move the sticks on 3rd down.

This next play, Haskins makes a throw from the shotgun, taking the snap and works to his right, finding #15 Cody White on the quick out route from the slot, throwing it to him on the move with White finishing the play by stretching out for the line to gain.

While Haskins made some pretty throws on the move, he had some inconsistencies as well when his feet weren’t set like we saw last week. For example, on this play Haskins takes the snap and steps up in the pocket, making it look like he is going to scramble but decides to throw it last second to his open receiver on the left sideline. His receiver stops at the sideline as Haskins releases the football, throwing it more towards the middle of the field as if he believed the receiver was coming to meet the ball. Overall, the play was a miscommunication between Haskins and the intended target, but also shows the issue of trying to make a tough throw instead of either setting his feet to pass or committing to run the ball.

Haskins wasn’t without his mistakes Thursday night in Philadelphia. There were several instances where ball placement could have been better as the ball either sailed high over his intended receiver or may have been a little behind his intended target. Here was probably Haskins’ most obvious blunder on the night, messing up the handoff to McFarland Jr. and decides to keep it after the play was blown, getting swarmed in the backfield for the loss on first down.

Here is another bad decision by Haskins later in the game on first down pass attempt over the middle of the field to #17 Isaiah McKoy, giving a pump fake after the fake handoff and fires it in to McKoy with the defensive back dropping back right in-line of the pass, tipping the ball up but was unsuccessful at bringing in the potential interception. The play didn’t result in a turnover, but Haskins should have either fired it in as McKoy was coming out of his break or move on to another target in his progression.

While Haskins didn’t play a perfectly clean game, he definitely showed improvement from his first showing against Dallas a week ago. For example, Haskins makes up for the porous throw that got tipped in the clip above on this play on 3rd and 6, scanning the field as he drops back to pass and goes from right-to-left on his progression, eventually finding White in-between two defenders and puts it on him with White reaching out across the line to get the first down on the play.

Haskins also showed off his ability to work outside of the pocket on his first TD pass as a Pittsburgh Steeler, rolling out to his right on 3rd and 11 to extend the play and finds #83 Anthony Johnson wide open in the back of the end zone for the easy TD catch.

While Haskins did dink and dunk near the LOS again for first few throws of the game like he did in the first game, he also attempted and completed several throws down the field. On this play, Haskins shows his arm strength on this throw up the seam to White in slot, humming it in to his target on a line before the free safety comes in to try an impact the pass.

Haskins Best throw of the night came on this pass attempt on third down where goes through his progression, taking his eyes from the middle of the field to the left sideline and locates #84 Rico Bussey in the hole on the 2 deep zone, throwing it on a dart to Bussey with good velocity to get the ball to his receiver before the safety comes in to attempt to jar the ball out. Bussey makes the catch for the for the big gain on Haskins’ beautiful pass attempt across the field.

Overall, I think it would be fair to say the Dwayne Haskins improved his play against the Eagles from the week prior, suffering some mishaps and blunders, but also showcasing his strengths and development as a quarterback by making reads effectively and leading the offense on multiple scoring drives.

This isn’t to say that Haskins has earned the right to be the #2 QB behind Ben Roethlisberger at this moment or is the clear successor to Ben after the season ends. Rather, Haskins has shown improvement with each opportunity he has had thus far, being in a good environment where he has the players and coaching staff continually backing him. The good thing is that there are two preseason games left which will give Haskins two more chances to continue forward with his improvement to make the roster and see where that may lead in the future.

What are your thoughts on Dwayne Haskins’ play in the preseason game against the Eagles? Did you think he played noticeably better than the first preseason game, or do you still see a lot of issues in his game that you think just can’t be corrected? Please leave your thoughts in the comments section below and thanks again for reading!