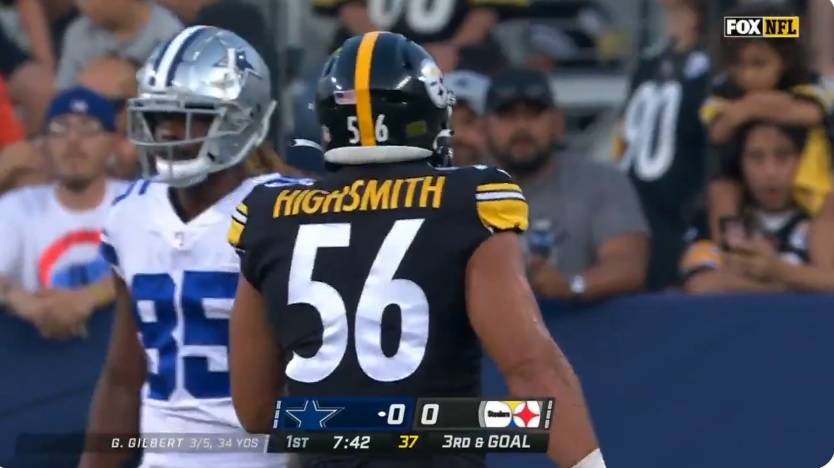 Alex Highsmith was one of those guys trying to turn a strong training camp into a strong 2021 preseason. One game into the new year, he has the makings of taking the sophomore leap.

It’s just one game and of course, came against the Cowboys’ backups. He wasn’t beating Tyron Smith out there on Thursday. But he showed what could be one of his favorite pass rush moves and top counters of the season. The inside spin. That’s how he picked up his one sack last night. Let’s take a look at it.

A drive-killer as Dallas marched down near the Steelers’ goal line. One on one with left tackle Ty Nsekhe. Out of a three-point stance (something you’ll likely see a lot more this year, just as T.J. Watt has done), Highsmith explodes out of his stance. He threatens an upfield rush and as soon as the LT flashes his hand on his punch, throws that right, inside hand, Highsmith executes his spin.

He rolls off Nsekhe, showing a quicker spin than I’ve seen in the past. That beats the block and Highsmith closes and finishes the play, sacking QB Garrett Gilbert.

For Highsmith, this isn’t new. He flashed that spin move last season, especially late last season. He showed it in the regular season finale against the Cleveland Browns, twice beating LT and first-rounder Jedrick Wills with this move. Neither resulted in sacks, though the second caused pressure that a teammate cleaned up, but they were good wins.

Alex Highsmith's inside spin move gave the Wills fits last season. Sack in the preseason opener against Dallas. Going to be a great counter when tackles overset. #Steelers pic.twitter.com/IZK2YV2iAE

Last night’s version, and granted, he’s facing a worse tackle, looked faster. And ended with an ideal result. Highsmith can win as a pass rusher in a variety of ways. He can spin, he can rip, he can club, he can cross chop, and hopefully he’s able to show more power and improve his pass rush, giving him another tool in his toolbelt.

Here’s what Highsmith said about the play after the game.

“I rushed him a few times before that,” he said after the game via the team website. ” I felt like I was threatening him upfield with my speed. He opened the inside for me, so I just spun inside and took what he gave me. So that’s what I did. And so that’s what I could do when I rush. I have a rush plan and like to set things up. And so that’s something I do with my spin, but I like to set it up with my speed.”

He’s able to throw a move no matter how the tackle sets. If they set to the inside, he can win to the outside. And when they cheat and set too wide, he can counter with that inside spin. Highsmith has the ability to answer for any situation he’s in and that can make him a potent pass rusher, even if his physical tools aren’t quite elite. Really good showing Thursday night.