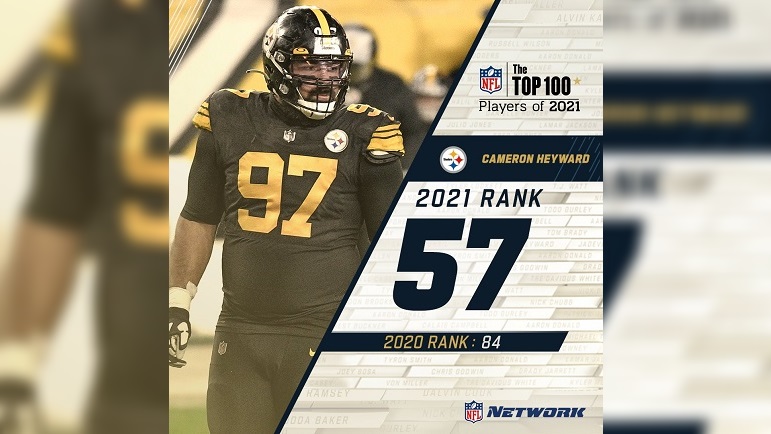 The NFL Network revealed players ranked 100-41 Sunday night as part their annual Top 100 rankings show and so far at least one member of the Pittsburgh Steelers defense has been included in that set of 60 players.

Steelers defensive lineman Cameron Heyward is ranked 57th overall in the Top 100 this year after registering 54 total tackles, four sacks, three defensed passes and an interception, the first of his NFL career, in 2020. Heyward had 19 quarterback hits in 2020 and seven of his tackles resulted in lost yardage. In total, Heyward played 806 defensive snaps in 2020 and he was held out of the team’s regular season finale so he could rest up for the playoffs. Heyward was selected to his fourth Pro Bowl last year as well.

Heyward was originally selected in the first-round of the 2011 NFL Draft out of Ohio State and to date he has registered 58 career sacks. The Steelers defensive captain signed another contract extension with the team prior to the start of the 2020 regular season.

The Steelers are expected to have at least two more players ranked in this year’s Top 100 NFL Players of 2021. The other two Steelers players expected to be ranked are safety Minkah Fitzpatrick and outside linebacker T.J. Watt.