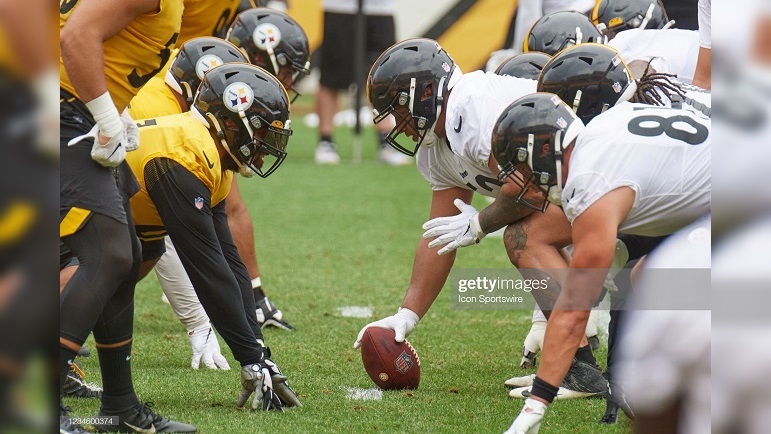 The Pittsburgh Steelers certainly appear destined to have rookie center Kendrick Green be their Week 1 starter when the team plays the Buffalo Bills a little more than three weeks from now. Ahead of that Week 1 game happening, Green, the team’s third round draft pick this year out of Illinois, has been forced to sharpen his skills against the likes of veteran defensive linemen Cameron Heyward and Tyson Alualu during training camp practices.

After Thursday’s training camp practice at Heinz Field ended, Heyward spoke to the media, and he was asked to describe what’s been like going against the rookie Green so far and if he’s going out of his way to get the young center ready for some bull rushes he’s likely to see from opposing team’s once the regular season gets underway.

“Honestly, I try to do that with everybody,” Heyward said. “You just never know.”

When reminded that he hasn’t ever really had to break in a Steelers rookie center to be prepared to be a Week 1 starter his entire career, Heyward said that it really isn’t that big of a deal who he lines up against in practices.

“Yeah, no I haven’t, but, shoot, I tried to do that versus our scout team,” Heyward said. “It doesn’t matter who you’re going against. But I think Kendrick’s just gotta approach it that way. He’s going against, you know, Tyson [Alualu] every day and Tyson’s gonna beat you up if you’re not careful. So, you know, he’s getting the best work he can. Hopefully it prepares him for the season. He’s asked a lot of questions and we’ll take it from there. And he’s gotta take his lumps throughout the season. That happens, but how do you continue to bounce back and not hit that rookie wall?”

That certainly is going to be a big question that Green faces throughout his rookie season. At the very least, he’s getting good practice in this summer against quality defensive linemen such as Heyward and Alualu. While Green has seemingly taken his share of lumps so far during training camp practices and the team’s first two preseason games, certain positive attributes of his have been noticed by Heyward along the way.

“Man, he’s athletic,” Heyward said of Green on Thursday. “He can get out in space. He communicates well.”

Green has started both of the Steelers preseason games so far and looks poised to start another one Saturday night against the Detroit Lions. It will be his first preseason start with veteran quarterback Ben Roethlisberger playing behind him, so you can bet all eyes will be on the rookie Saturday night at Heinz Field.