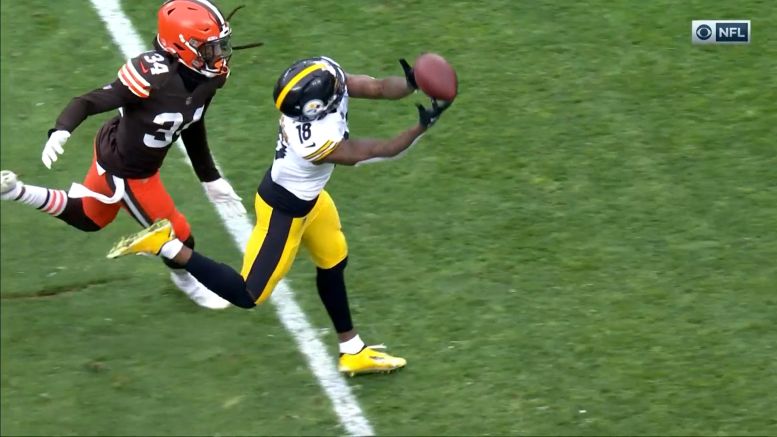 The Pittsburgh Steelers’ current 90-man roster includes several players voted to or named to a Pro Bowl at least once so far during their respective careers. That long list of players includes the likes of quarterback Ben Roethlisberger, defensive tackle Cameron Heyward, outside linebacker T.J. Watt, cornerback Joe Haden, safety Minkah Fitzpatrick, tight end Eric Ebron, wide receiver JuJu Smith-Schuster, guard Trai Turner, and kicker Chris Boswell. While a few of those players have a good shot at being a Pro Bowler again in 2021, will the team have any first-time selections after the season concludes?

Marc Sessler, Around the NFL Writer for NFL.com, recently attempted to identify one potential first-time Pro Bowler from every AFC team and for the Steelers, he has third-year wide receiver Diontae Johnson as his choice. Below is Sessler’s reason for making Johnson his selection for the Steelers.

Questions hover around Pittsburgh’s offense. The line looks iffy and it’s unclear what’s left of Ben Roethlisberger. The Browns fan in me tends to believe the following: The Steelers will figure it out. They always do. Besides, only a fool would ignore the weaponry. Electric wideout Chase Claypool and rookie runner Najee Harris are spicy Pro Bowl possibilities. I’m banking on Johnson, though, to reduce his frustrating drops and lean on his next-level ability to get open downfield. This is a special athlete with the skills to crack secondaries like an egg.

Johnson is very much a reasonable selection for the Steelers when it comes to possible first-time Pro Bowl selections the team might have in 2021. After all, Johnson did lead the Steelers in receiving yardage in 2020 with 923 via 88 catches. That was with him even leading the NFL in drops, a problem he’s hoping he has fixed this offseason. The former third-round draft pick out of Toledo could very well lead the Steelers in targets once again in 2021, and quite possibly have his first 1,000-yard receiving season. In case you did not already know it, Johnson leads the entire 2019 NFL Draft class in receptions to date with 147.

Cracking the Pro Bowl in 2021 will be a very tough chore for Johnson, however, especially with him not having the name recognition that most of the other top wide receivers in the AFC currently have. In fact, fellow Steelers wide receiver Chase Claypool is likely more widely recognized than Johnson entering the 2021 season. Claypool could even rival Johnson in 2021 when it comes to receiving statistics, so he’s likely got as good of a chance, if not better, to be a first-time Pro Bowler than Johnson does.

Outside of Johnson and Claypool when comes to potential first-time Pro Bowlers for the Steelers in 2021, perhaps third-year inside linebacker Devin Bush needs to be on such a list. Bush, however, would need to have a tremendous 2021 season to find himself as a legitimate Pro Bowl selection. I have his odds of making the Pro Bowl in 2021 being a lot lower than that of both Claypool and Johnson, however.

Quite honestly, Steelers rookie running back Najee Harris probably has the best shot at being the Steelers lone first-time Pro Bowl selection in 2021. Harris, the Steelers’ first-round selection this year, is primed to be the team’s bell-cow running back in 2021. That could result in at least 300 total touches. If Harris can stay healthy, he could very well wind up leading the AFC in total yards from scrimmage by a running back. If that happens, one would think he would be a slam-dunk Pro Bowl selection.

So, in closing, while Sessler’s choice of Johnson is an understandable one, I think I would have made Harris my choice if I were him. I also think Claypool would have been my second choice, with Johnson not too far behind him.