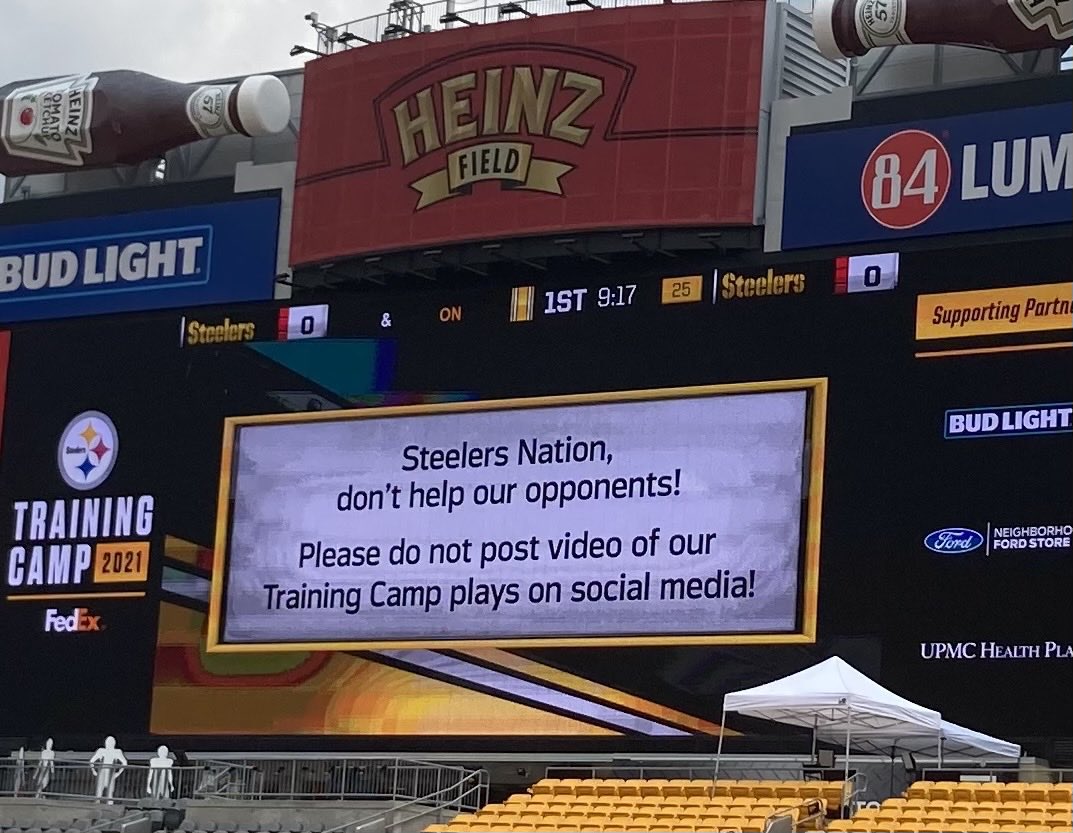 Over the last two years or so, Warren Sharp — a predictive NFL analytics & visualized data analyst who runs SharpFootball.com and has cameos on NBC Sports and The Ringer — didn’t hesitate to take yet another shot at the Pittsburgh Steelers Thursday afternoon.

During the second official training camp practice at Heinz Field Thursday, the Steelers posted a message on the big screen requesting that fans not post any videos or pictures of the actual action on the field to social media. It’s not uncommon for teams to make these requests of fans, though it’s hard to enforce. Plus, it’s not uncommon for teams to try and control what gets out from practice, considering reporters aren’t allowed to report what they see during closed sessions oftentimes.

Despite knowing that later point, Sharp thought he’d get cute on Twitter, taking a shot at the Steelers while citing a decision made nearly eight months ago at this point.

but now it’s the fans job to help them gain an edge pic.twitter.com/MoHj7kwT4c

The Steelers requesting fans don’t post videos of plays from training camp is somehow preposterous to Sharp since they punted from midfield down 12 points to the Cleveland Browns late in the Wild Card loss.

To be clear: The Steelers should have never punted in that situation. But the franchise asking fans not to post videos during training camp? That’s very normal and happens across the league every single training camp practice. Sharp doesn’t seem to understand that and shows just how far removed from the game he actually is, later following up that tweet with a reply lamenting the Steelers not allowing reporters to report during the offseason that the Steelers were working on play-action passes.

from reporting that they were, in fact, practicing some play action passes from under center this year 😭

(via the Athletic’s Mark Kaboly) pic.twitter.com/IvJcRFmF8n

For a guy who is so good at crunching numbers and trying to predict outcomes, you’d think he’d know the league rules overall. Clearly he doesn’t as he tries to blast the Steelers for enforcing the league rules regarding media and what can and can’t be reported throughout the offseason.

It’s becoming exhausting with Sharp at this point. He’s taken on this media persona where he tries to be funny and has an axe to grind with certain teams that haven’t hired him on as a consultant, and it becomes more and more apparent every day. This is just the latest example from him and his disdain for the Steelers.

It’s unnecessary, yet he sure got the attention he wanted.