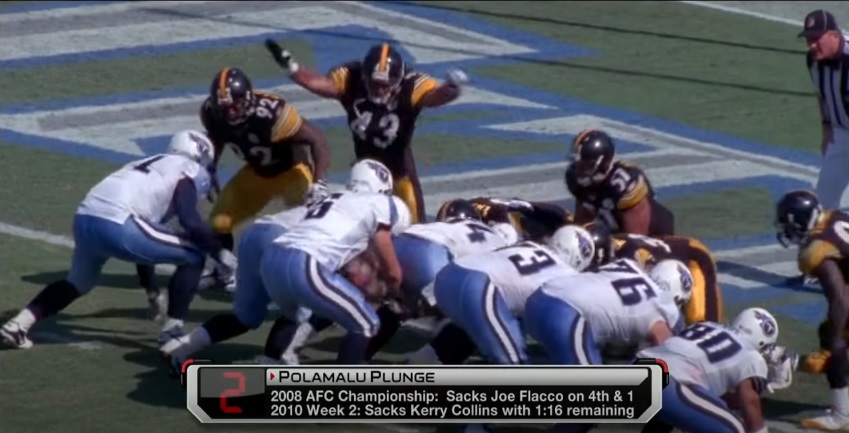 Making superhuman plays became routine for Troy Polamalu. Diving interceptions, diving tackles, and he had a special ability to time the snap and jump through – or over – an offensive line. One of his most famous examples came against the Tennessee Titans, Polamalu leaping over the goal line and Titans’ o-line to take down QB Kerry Collins.

You probably already know the play I’m talking about but if you don’t – and even if you do, it’s fun to relive – take a look.

In a Zoom call with the media, he was asked about that moment and what led him to charge the line and leap over well, everyone.

“I’ll give you some extreme vulnerability here,” Polamalu told reporters. “What’s funny they had a hurry huddle and we had called Cover Two on the two yard line. It was pretty much just man-to-man of the corners. I’m not gonna be deep half over the corner.”

So there wasn’t much of a coverage role Polamalu needed to have. There wasn’t a normal “deep half” to play in Cover 2. He also knew there was little downside if he mistimed the play or it didn’t work out the way it did.

“Then I also thought to myself that had, if I did jump offsides, you go from the two and to the one. It’s not going to be that much different. So I kind of, I guess, took a calculated risk there and thank God it ended up working out well. got it. I can’t say that it was a play that wasn’t out of pure instinct, but there was some calculation for sure put into that.”

It also helped the Steelers were up 19-3 with only a couple minutes left to go. But it worked and Polamalu wrangled Collins down at the line of scrimmage. Of course, this is one of several such plays Polamalu made throughout his career. He did it against the AFC North, having similar moments against Joe Flacco and Andy Dalton.

And sometimes, his attempt didn’t work. Against the Texans in 2014, he jumped the snap (literally) a half-second too early. Like the Titans’ game, it came at the goal line so the penalty didn’t impact the defense much.

Plays like this are the reason why Polamalu is being inducted into the Pro Football Hall of Fame. They were plays few players in the league has ever been capable of making and even fewer of them dared to do it. It’s what made him special and why he’ll soon be memorialized in football history.