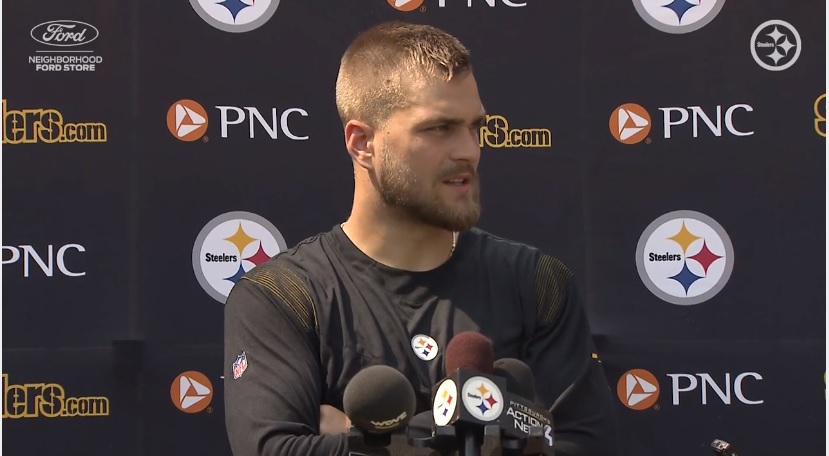 By all accounts and even if you ask Pat Freiermuth himself, he’s had a solid start to training camp. But he knows the work is just getting started. And tomorrow, it gets a lot harder. Because the defense gets to hit back. But his well-rounded skillset is leaving a good impression on his coaches.

Freiermuth spoke with the media following Tuesday’s practice, the final padless one before the team goes full-out Wednesday.

“I was drafted cause I could do both things,” he said of his blocking and receiving ability via the team website. “Obviously it’s kind of hard to show that you can block with no helmets on. My job is to make catches and my job is to block d-ends and block linebackers. I know that I’ve had a good first couple of days of camp, but I know the real work starts tomorrow when the pads go on. And I gotta prove that I can go out there and block d-ends.”

It reminds me of a statement Tomlin made to international prospect Christian Scotland-Williamson a couple years back. The idea that if he could block base ends, he could secure a roster spot.

“Coach told me and put the challenge to me,” CSW recalled in a conversation with Tomlin in 2019. “Block a 4-3 defensive end and then I’ll have a job.”

Of course, he was never able to accomplish that, and was eventually cut by the team. But Freiermuth has a much better chance of succeeding. Out of the box, he’s a much better blocker, used as an in-line tight end at Penn State and able to the dirty work required by most Steelers’ tight ends. Eric Ebron has been a departure from that. The Steelers’ run game has paid the price for his struggles there.

Tomorrow’s practice should be a heavy run session and chance for Freiermuth to make some plays in the ground game. He probably won’t be tasked to block Cam Heyward or Stephon Tuitt, but he’ll have to kick out or seal down guys like T.J. Watt, Alex Highsmith, and Melvin Ingram.

“I’m just gonna go out there and put my body out there and just try and make it happen and open the holes for Najee and the other running backs.”

If Freiermuth can make an immediate impact as a blocker, he’ll log substantial playing time as a rookie. As a receiver, his best traits are his hands and ability to make tough, combat catches, which he reportedly has done early on in camp.

As Freiermuth noted though, that’s all been without pads. It’s hard to show your blocking chops in shells and it’s difficult to show you can make tough catches. Receivers have it easy going over the middle or going up for the ball in the red zone when the defense can’t hit back. That changes on Wednesday. And we’ll find out how Freiermuth looks once things start feeling a lot closer to real football.

So far though, Freiermuth is showing the skillset and attitude of a Steelers’ tight end.