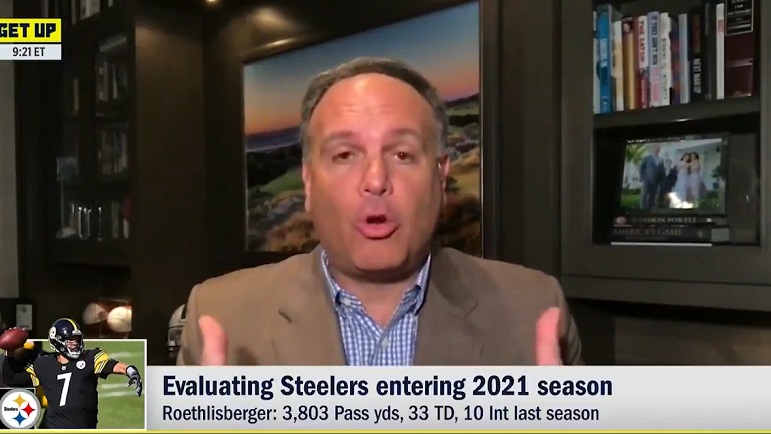 Former NFL front office executive Mike Tannenbaum has been down on the Pittsburgh Steelers and veteran quarterback Ben Roethlisberger for quite some time now. You’ve likely heard him talk quite negatively about the Steelers and Roethlisberger regarding the 2021 season several times so far this offseason and on Thursday he continued to do so during the morning edition of ESPN’s ‘Get Up!’ show.

"[Ben Roethlisberger] is going to be bad, and I expect him to benched by the middle of the season. … He's had a great career. It's over."

“He’s going to be bad,” Tannenbaum said Thursday of Roethlisberger. “And I expect him to be benched by the middle of the season and here’s why. When I was with the Jets and the Dolphins, Ben Roethlisberger was a big, physical, could get the ball down the field quarterback. And stats don’t always paint a picture, but in 2015, Ben Roethlisberger was third in the NFL in yards per pass attempt, meaning he got the ball down the field. Last year at 38 years old, he was 31st. He just checked the ball down. Now, they had guys that can make plays once they had the ball in their hand, the Smith Schusters of the world, but at 39, losing the quarterback of your offensive line in Maurkice Pouncey, he’s going to get rid of the ball faster. That’s going to compress the field. He is going to make sure that he is protecting himself and getting rid of the ball and when that happens, it’s really hard to score points in this league because now you have 11 defensive players closer to the line scrimmage. So, he’s had a great career, it’s over. They’re paying Ben Roethlisberger for what he used to do, not what he’s going to do in the future. And while those three other quarterbacks in the AFC North are getting better, he’s getting older and that’s a big problem for the Steelers long-term.”

Tannenbaum did hit on a lot of great points when it comes to Roethlisberger’s outlook for the 2021 season, especially when it comes to him needing to be able to push the football down the field more often and with success, and that means between 6-19 yards past the line of scrimmage, not just 20 yards or more. The Steelers offense will also need to rely less on Roethlisberger dropping back 40 times a game in 2021 if the unit expects to have success weekly. To hopefully help in that specific area this year, the Steelers selected running back Najee Harris in the first round of the 2021 NFL Draft in addition to retooling nearly all of their offensive line.

On the heels of Tannenbaum saying Thursday what he said about Roethlisberger, fellow ESPN analyst, former NFL quarterback Dan Orlovsky, was given a chance to rebuttal.

That’s a fair rebuttal from Orlovsky and hard to really argue. Look, Roethlisberger did get the football out very quickly in 2020 but he also took a lot of deep shots of 20 or more yards down the field as well. As a whole, the Steelers offensive line did stink last season, especially in the running game phase. If the Steelers can’t run the ball effectively and consistently in 2021, Roethlisberger can’t be expected to be a savior of sorts. The Steelers made it a primary focus of theirs this offseason to improve the running game and part of that focus included a retooling of the offensive line.

After Orlovsky rebutted, Tannenbaum was given the last word on the topic.

“Dan made my points for me, which is when you have a 39-year-old quarterback and you have massive questions at center and left tackle, that’s the worst situation you possibly could be in,” Tannenbaum said. “If Ben Roethlisberger was behind the Colt offensive line, I can understand maybe getting another year out of him. But the confluence of a bad offensive line and a quarterback, who, again, was 31st out of 32 quarterbacks in yards per pass attempt, that’s going to compress the field. Yeah, he can make a throw here and there, but over 17 games, his performance isn’t going to be good enough. And if I’m a Steelers, I’m concerned, because you said it, there’s three budding superstars in that division now, and you have no answers at that quarterback position moving forward.”

Personally, I can’t see Roethlisberger being benched in 2021 unless he just falls completely on his face in the first two-thirds of the season. Look, might Roethlisberger wind up being the worst quarterback in the AFC North in 2021 from a yards per attempt or depth of target standpoint? It’s certainly possible, but my money right now is on Cincinnati Bengals quarterback Joe Burrow coming in last. That said, Roethlisberger still has a chance to finish first or second in the ever-important adjusted net yards per attempt stat in 2021.

Last season, Roethlisberger posted an ANY/A stat of 6.27 and that was third-best in the AFC North. He wasn’t too far behind Baltimore Ravens quarterback Lamar Jackson (6.70) for second place, however. If Roethlisberger can get his ANY/A stat back up to 6.75 or better in 2021, the Steelers should be able to compete for the AFC North crown. If he can’t, then Tannenbaum will likely wind up being right when it comes to the 2021 Steelers and especially if the offensive line has another poor season.