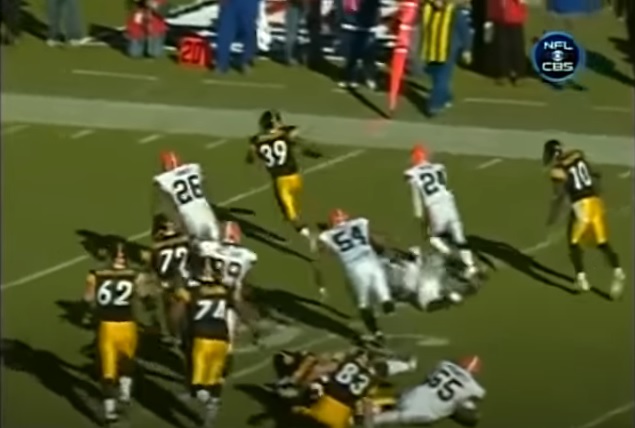 He was called “Fast Willie Parker” for a reason. Speed alone was the big reason why the Steelers signed him as a virtual unknown free agent out of North Carolina. It certainly wasn’t production — Parker was a third-stringer most of his career.

But he got in the NFL and made his mark, showcasing his wheels in the open field. A broken leg late in 2007 sapped him of that big-play ability. His 2008 stats suffered because of it, averaging a career-worst 3.8 yards per carry in just 11 games. It felt pretty clear his career was quickly coming to a close.

Fast forward to Week 17, the finale against the typically hapless Cleveland Browns. Parker got the start and for one final time in the regular season, went off. Scoreless near halftime, Parker put the first points on the board with a vintage 34-yard run. Power off right side, Chris Kemoeatu leading the way and good blocks by Heath Miller — how good would it be to have a blocker like him in this lineup — and Santonio Holmes.

That gave Parker the space he needed to get into the second level. The angle-buster he was, Parker ran away from the safety and down the sideline into the end zone.

Parker would finish the game with 23 carries for 116 yards and that touchdown. His score opened up the floodgates and the Steelers would score the game’s 31 points, shutting out the Bruce Gradkowski-led Browns 31-0. Parker would come to life one more time in the Steelers’ Divisional win over the Chargers, putting up 146 yards and two touchdowns.

He would return for the ’09 season but was firmly planted as Rashard Mendenhall’s backup. He carried the ball just 98 times and failed to find the end zone on the ground, though he caught a TD pass against the Bengals. His NFL career would end in 2010 after a brief summer stay with Washington. He announced his retirement two years later.