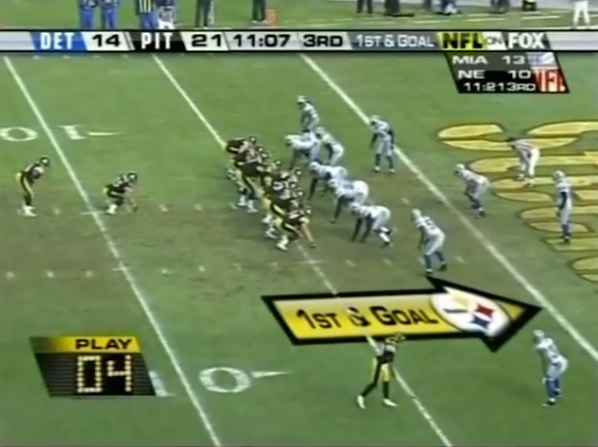 Every Steelers’ fan remembers the team’s magical 2005 run. The face of it was RB Jerome Bettis. In his final season, and at the time, everyone knew it, he was no longer the focal point of the team. He was the finisher, coming in around the goal line to barrel his way into the end zone.

Forgetting that pesky Colts’ fumble, that’s what he did during that playoff run. He found the end zone in the Steelers’ first three playoff games (if only he could’ve scored against the Seahawks in the Super Bowl).

But his final score that goes down in the regular season books came in Week 17, a home game versus Bettis’ hometown Detroit Lions. A game the Steelers needed to win to get into the postseason. And The Bus drove them into the playoffs with a four-yard plunge.

Watch the clip below and you — somehow — lose sight of the 250-pound Bettis as he twists and turns his way over the goal line. He followed the blocks of FB Dan Kreider along with the clearout block by Jeff Hartings and a great second-level effort play from LG Alan Faneca. A couple Hall of Famers making plays to finish off a drive.

Bettis and the Steelers would go on to win one for the thumb in Super Bowl XL, beating Seattle in the city of Detroit. He retired on top of the football world and made for one of the best stories in football history.