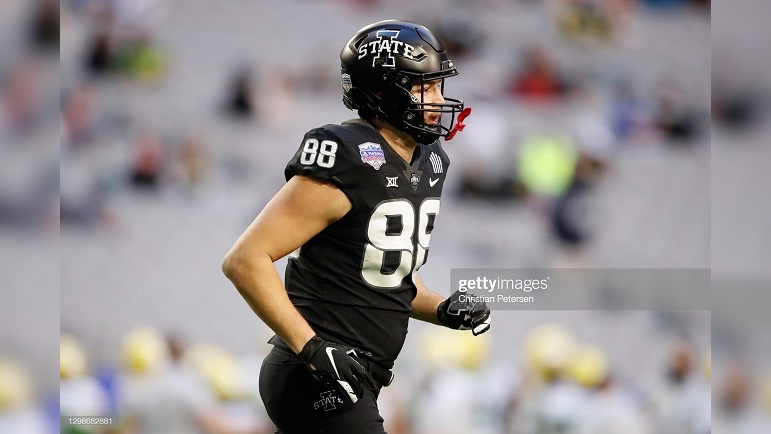 New Summer series for Steelers Depot highlighting a handful of 2022 NFL Draft hopefuls and options for the Pittsburgh Steelers we could be talked a lot more about nine months from now.

-Has lined up in-line, split out wide, in the slot, and in the H-Back position

-Used very well on the over route, shallow crossers, TE/slot wheels, post/corners, and up the seam

-Good athleticism for his size, but won’t wow you with his speed or explosiveness

-Can stand to add more functional strength to have a stronger base at the point of attack in the run game.

-Went on to play in a reserve role his 1st season after with limited production, posting 11 receptions for 137 yards (12.5 YPR) and three TDs in seven games played

-Charlie Kolar grew up a die-hard Sooners fan in the town of Norman hoping one day to play for his hometown team. Oklahoma wasn’t interested in offering him out of high school, but Kolar’s decision to attend Iowa state and play for Matt Campbell proves to be a great one for the tight end. Kolar has become a force for the Cyclones after three seasons, owning many career records at the tight end position. He may not be the ultra-athletic prospect we have seen with some prospects as of late, but by no means is he lacking in this area. Kolar possesses great play strength and deceptive speed that builds as he gets going. Here we see he height and athletic profile come into play against Texas Tech as he aligns on the far left of the bunch formation and stretches the seam up the sideline, getting a step on the defender in coverage who is slow to transition out of his backpedal. He locates the ball in the air and high points it along the boundary with the defender in coverage, coming down with the ball in-bounds for the score.

His size and leaping ability make him a mismatch in the red zone and jump ball situations against most defenders he will face. Here against Baylor, we see Kolar use his body well by keeping the defender on his back hip and is able to make the catch while contested on the over route, holding onto the ball and turns up the sideline to dive into the end zone while breaking out of one tackle attempt and running through contact from another for the touchdown.

Another great example here of Kolar’s jump ball ability against Oklahoma where he comes off the line running the wheel route up the right sideline, getting a step on the defender in coverage and elevates up into the air to catch the ball at its apex, coming down with the catch while taking a hit from new Steelers DB #13 Tre Norwood for the big gain.

While being a jump ball specialist with a basketball background, Kolar is a well-rounded receiver with soft, sure hands and can make a variety of catches from different platforms. In this clip against Oregon, we see Kolar work to the soft spot in the zone coverage in the middle of the field and manages to catch the ball thrown into the ground, diving and reeling in the catch while adjusting to the ball.

He has good body control for a player of his size and consistent hands. Here against the Sooners, we see Kolar run up the sideline and find a soft spot in the zone coverage. His QB puts a lot of zip on the football, shooting it out of bounds. Kolar is able to climb the ladder and snag the ball out of the air while being able to come down with both feet in-bounds along the sideline as momentum takes him out for the clutch completion.

He also is a good route runner, being able to create enough separation when considering his 6’6, 260lb frame. Here against the Mountaineers, Kolar uses he big body to his advantage by getting into the defender in coverage and spins out to the left on the quick out/arrow route concept, getting a subtle push off at the top of his route to get ample separation for the easy pitch-and-catch which he takes up the sideline for the TD.

Kolar is also a strong run blocker, showing a dedication willingness to play his part in the run and impose his will when the opportunity presents itself. He runs his feet well on contact and will drive defenders back to and through the whistle. Here we see Kolar come off the edge and pick up the safety on the block, sealing him off from getting to the outside where QB #15 Brock Purdy is carrying out the fake handoff. He stays engaged through the entire rep with arms extended and plays through the whistle.

He could stand to add more functional strength to his base and punch, but his blocking ability coming out is higher end than a majority of prospects you will see. Take a look on this play where Kolar lines up on the line in the bunch formation and comes down on the second level defender, washing him down and out of the play to clear a lane for #28 Breece Hall to get the easy score.

Overall, Kolar is a well-rounded prospect that can impact the game in all levels. He can line up anywhere on the formation and present mismatches for defensive backs and linebackers with his size/athleticism combination. He would fit in well in nearly any scheme proving to be a great asset in run heavy systems that utilize play action or spread systems to get the mismatch you want. His play style reminds me a lot of Kyle Rudolph who also isn’t a freak athlete but is a quality blocker and red zone/jump ball specialist with great size who can be a great security blanket for his QB. While his athletic upside may be capped from a speed/explosiveness perspective, he should look to contribute fairly early at the next level and grow into his own as a legitimate playmaker after a season or two. In the case of Pittsburgh, should the team allow Ebron to walk after the season as a FA and want to add a capable second option to play with Pat Freiermuth to build a potential dynamic duo for two TE sets for years to come, Kolar could be a player on their radar.