The Pittsburgh Steelers made another significant transaction on Monday and that was the signing of free agent outside linebacker Melvin Ingram. On Tuesday, the team also announced the signing of free agent tackle Chaz Green to a one-year deal as well in addition to making the Ingram one-year signing official. On the heels of those two moves, it’s a perfect time to update where the team sits from a salary cap perspective for the 2021 season and with training camp about to start, and especially with several other Steelers blogs posting blatant misinformation in the last 12 hours.

For starters, we will assume that Ingram’s cap charge for 2021 is $4 million as it has been reported that his one-year contract totals out at that amount. We will need to wait a few days before we know the exact details of Ingram’s contract and that includes knowing the filly guaranteed amount. For now, however, we will assume it’s a flat one-year deal for $4 million and that it does not include voidable years. As for the one-year deal signed by Green, it’s likely a veteran benefit contract with a base salary of $990,000 and a reduced salary cap charge of $850,000. It will be a stunner if it is not. The Steelers are also still waiting to sign rookie center Kendrick Green as of the time of this post.

Let’s start first with what the NFLPA shows on Tuesday morning for the Steelers. They now have the Steelers with 91 players under contract for the 2021 season, and the team $12,749,106 under the cap. The amount under is lagging behind to real-time, however, as the NFL has yet to process the signings of Ingram and Green and the two players waived to make room for them, tackle Jarron Jones and outside linebacker Calvin Bundage.

Bundage was given a signing bonus of $7,500 to sign after he went undrafted, so his Tuesday waiving results in the Steelers having a dead money charge of $2,500 in 2021 and another dead money charge in 2022 of $5,000. There is no dead money associated with the waiving of Jones, however.

After top 51 roster displacement takes place, the Steelers will effectively use just $3,340,000 in available 2021 salary cap space by signing Ingram to a one-year, $4 million contract. As for the signing of Green, his contract, assuming it is a veteran benefit deal, should not use up any additional salary cap space.

So, the result of the Steelers most recent transactions should now have the team as being $9,409,106 under the cap, pending the signing of the rookie center Green.

Below is the latest breakdown of the Steelers’ current and future cap situation. The breakdown includes approximated predictable future costs the team will have prior to the start of the 2021 regular season. The breakdown should be self-explanatory. These predicable costs include the remaining unsigned draft pick, Green.

As the chart shows below, all the Steelers’ presumed $9,409,106 cap space that they currently have as of Tuesday morning is already all spoken for. In fact, you can essentially say that the Steelers are effectively $1,177,396 over the cap right now, based on predicted forthcoming costs the team will have between now and the start of the 2021 regular season.

Assuming the Steelers do intend on getting restructures done on both Tuitt and Boswell in the coming weeks, the team effective has an estimated $3,832,604 in 2021 salary cap space to work with right now. In short, the Steelers could still add a free agent player or two if they like if the 2021 cap chargers of those players are around $3 million or less. 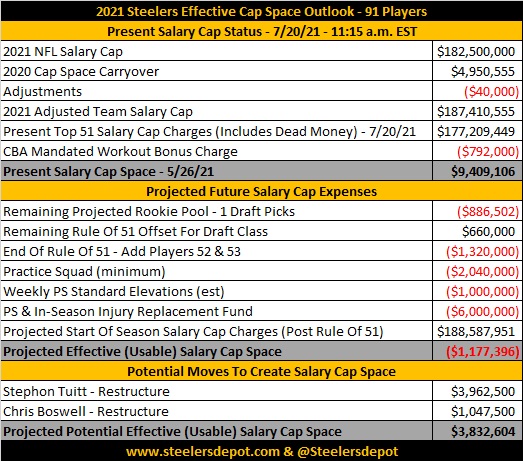