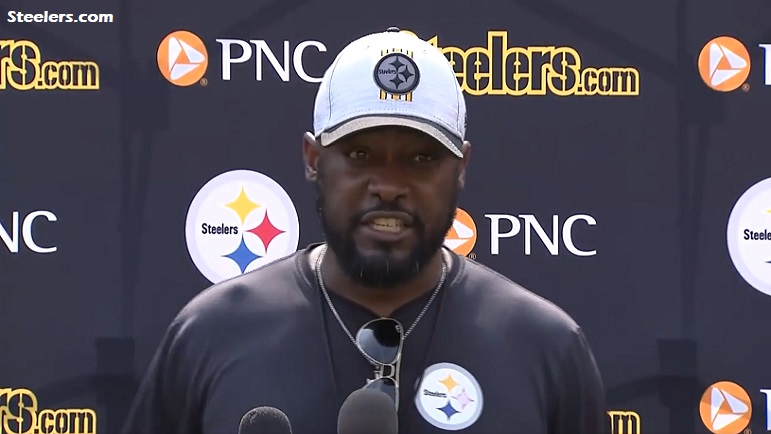 The Pittsburgh Steelers conducted another training camp practice at Heinz Field on Thursday and after the season ended, head coach Mike Tomlin gave a brief rundown on the overall health of the team.

“We’ve got a couple of guys, like we’ve talked about, [Eric] Ebron is dealing with his day-to-day elbow,” Tomlin said after practice. “Some other guys, Cody White with his hamstring. I just gave Joe Haden a day. We’ll mix that around through some of the more veteran players in an effort to preserve them, but really, it’s less about preserving them as I often mention and it’s more about getting additional exposure to some of the younger guys. When we give a guy like Joe Haden a day off, it gives a guy like James Pierre an opportunity to run first group reps and compete against guys like Chase [Claypool] and Diontae [Johnson] and others. And so, we do it in that spirit also.”

Tomlin also named a few more players who were dinged up during Thursday’s practice.

“Jaylen Samuels limped off, man, I don’t know much about that,” Tomlin said of the running back. “He’s being evaluated. And I think Dax Raymond same thing at the very end in the two minutes. So, we’ll deal with those things. It’s a part of the process.”

According to our very own Alex Kozora on Thursday, Melvin Ingram didn’t do much in practice earlier in the day. Maybe he was given a day off as well. Outside linebacker T.J. Watt and defensive end Stephon Tuitt also continued to work mainly on the side on Thursday, according to Kozora. After practice was over with, Tomlin was asked about Watt and when he anticipates the edge rusher being able to practice more fully.

“I’m just day to day, to be honest with you,” Tomlin said of Watt’s status. “Probably the same level of anticipation with some others, Stephon Tuitt and others. I’m focused on the guys that are working and their opportunities and the process that this group is collectively going through.”

Tomlin was then asked if Watt is dealing with any sort of injury that has him limited on the side at the start of training camp.

“You know, I don’t have to report injuries this time of year, so I won’t,” Tomlin said.

Tackle Zach Banner and center J.C. Hassenauer both had extremely light days on Thursday, according to Kozora. Banner is still in the final stages of rehabbing his surgically repaired knee while Hassenauer is still attempting to battle back from an early camp injury to his lower left leg.

The Steelers will resume camp practices on Friday at Heinz Field with a very late evening session under the lights.