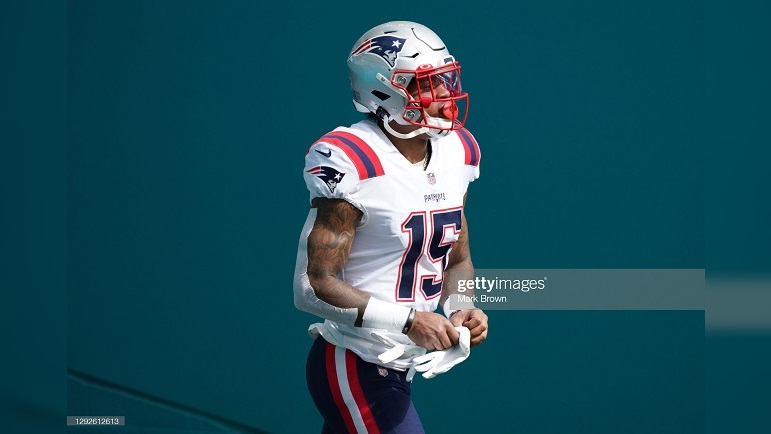 Just this past week, a statement was released by New England Patriots WR N’Keal Harry’s agent formerly requesting a trade for his client. Harry has failed to live up to the billing as a first-round draft choice for the Patriots thus far in his NFL career, only tallying a total of 45 catches for 414 yards (9.2 YPR) and four receiving TDs in 21 games played, 14 of which he started.

Harry flashed physicality at the catch point and the ability to create after the catch when he was at Arizona State, prompting New England to select him 32nd overall in the 2019 NFL Draft at the end of the first round. However, after failing to record more than 58% snaps played on offense in his first two professional seasons along with the recent signings of Kendrick Bourne, Nelson Agholor, Jonnu Smith, and Hunter Henry this offseason, it appears as if the team is prepared to move on from Harry with a more crowded receiving core going into 2022. ESPN’s Jeremy Fowler reported that an he spoke to an NFL executive that believes N’Keal Harry will be worth a conditional 6th round pick for this upcoming draft, a small price to pay for what was a top-32 selection just two years ago.

Would the Pittsburgh Steelers make sense as a potential landing spot for Harry should they have interest in acquiring him? The short answer frankly is yes… if they want to. See, Harry is a contested catch specialist that thrives on the boundary when asked to size up smaller defensive backs and attack the high point of the football in the air. He is able to play through contact by the defender in coverage and come down with highlight reel grabs in the red zone like we see here back in college at ASU.

This ability to be a red zone weapon in college transitioned well the league in his first two seasons, being able to fend off contact in press man coverage near the goal line and get position on a defender, adjusting his body to make the catch in the end zone along the sideline like we see on this example of a back-shoulder fade against the Cowboys.

Here is another example this past season against Kansas City where Harry gets a step on a defender on the fade route to the back corner of the end zone, laying out for the football while coming down with the catch in-bounds for the score on the play.

Not only was this “big boy” receiving style successful in the red zone, but also along the sideline when presented with one-on-one coverages where the QB found Harry in an advantageous matchup against a smaller defensive back. Here against the Rams, we see Harry run the stop-and-go concept, faking the curl route to get #31 Darius Williams to lunge forward but then commits to running up the sideline on the vertical pattern, getting a step on Williams in coverage but proceeds to come back to the underthrown ball along the sideline, contorting his body in the air to make the grab in coverage and come down in-bounds for the big chunk play.

Alas, Harry has had a tough time adjusting to the NFL game due to a lack of creating ample separation in his routes. He struggled with this aspect as well in college at Arizona State, but he was so much more physical than the defenders in the Pac-12 he was facing on a weekly basis, so he was still able to win plenty of 50/50 ball opportunities. He hasn’t had the same level of success thus far in the pros, mainly because defenses are so much faster to react and attack the catchpoint to knock the ball free like we see on this example against the Chiefs where Harry rounds off his route at the top of the screen and allows the defender to sit on his back hip, not being able to get a step of separation and allowing the defender to attack the ball as it comes in on the slant pattern for the incompletion.

Here’s another example against the Seahawks where Harry is facing zone coverage and is running a hitch route. He has plenty of space to come back to the ball sooner with the corner playing deep but feels the need to carry up the sideline up on the defender’s toes, but can’t decelerate effectively, taking too many steps to come back to the football, making it easy for the defender to drive on the pass and force the incompletion.

What made Harry so tantalizing as a prospect coming out of Arizona State was his ability to run after the catch and create in the open field as a receiver listed at 6’4, 225lb. He served as a wildcat QB as well as returned kicks and punts for the Sun Devils during his time in Tempe, showing he could be more than just a simple jump ball specialist. Here is one example from his college days of Harry catching a WR screen on the perimeter and then makes the magic happen by evading several defenders and reversing field on the entire defense, showing his moves after the catch to take what should have been a loss for an impressive touchdown.

However, in his limited opportunities thus for in the league, we haven’t seen the same dynamic play in the open field that we saw in college. Harry appears to be more apprehensive in terms of making a move, but also has to deal with better, more instinctive athletes reacting quicker on the football field and taking better angles to him to bring him to the ground like we see on this WR screen pass to the right side of the formation against Seattle where Harry catches the pass, but can’t make something happen as a defender fights off the block from the outside receiver as the rest of the defense converges to get the stop on the modest gain.

With the likes of JuJu Smith-Schuster and James Washington scheduled to become free agents at the end of the 2021 season, the acquisition of Harry would make sense from a skillset perspective as Harry can play that physical receiver role JuJu plays over the middle of the field and in the red zone as a contested catch guy that doesn’t generate a ton of separation either, but still wins his fair share of combative catches. Washington definitely has more deep speed than Harry does and can do a better job of separating, but Harry can fill that role as a boundary receiver who can win along the sideline and has the size/strength profile to win in the same fashion Washington currently does, having the height and size advantage on Washington to make up for a lack of overall deep speed.

Overall, I do see Harry as having a similar skillset to what someone like Smith-Schuster currently provides the Steelers offense, and if it only costs a conditional 6th round selection to acquire the former first round pick, I do think that is a price worth paying. However, let’s recognize that Harry would be hard-pressed for playing time this season in Pittsburgh with the likes of Johnson, Smith-Schuster, Claypool, and Washington all likely in front of him on the depth chart, meaning this year would be a redshirt season for him where he would mainly be a sub in red zone situations and have to contribute on special teams.

Also, with Pittsburgh already forfeiting several mid-round selections in the 2022 NFL Draft, they may not be so including to part with more draft capital, albeit later on in the draft, for a player they currently view as a strength on their roster compared to acquiring an EDGE, CB, or OT prior to the start of the regular season for that same selection to bolster a position of need.

That being said, I do think that Harry is worth the price that is being relayed out there at the moment but given the state of Pittsburgh’s WR core at the moment and the other needs the team currently has, I do find it unlikely that a trade for Harry would actually occur.

What are your thoughts on N’Keal Harry? Do you think he is a clear bust, or do you think he could have a productive career if utilized in a different offensive system? Would you like to see Pittsburgh acquire him for a conditional 6th round pick or later, or would you want to rather keep the pick or trade it for another position of need? Leave your thoughts in the comments section below and thanks again for reading!