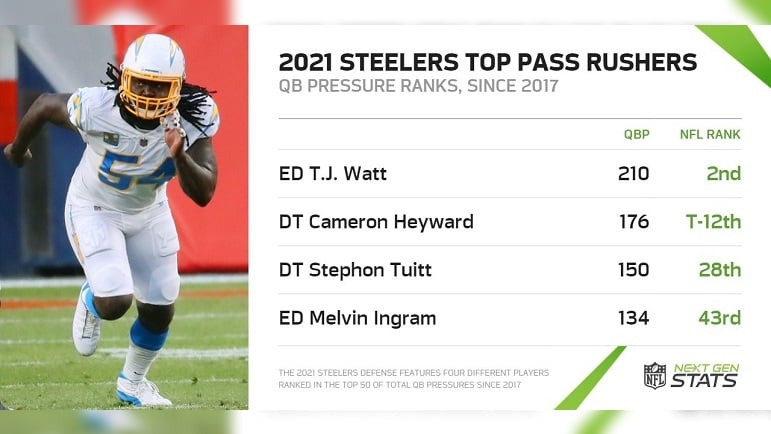 What kind of dividends will new Pittsburgh Steelers outside linebacker Melvin Ingram pay in 2021? If the 32-year-old former first-round draft pick stays healthy in 2021, something he failed to do in 2020, Ingram should provide solid depth behind T.J. Watt and Alex Highsmith and be a player who can log around 400-500 defensive snaps in a Steelers uniform. On paper, Ingram now makes the Steelers defensive front look a lot more impressive than it already looked heading into this week.

As Next Gen Stats pointed out on Twitter on Tuesday, the Steelers’ defense now features four different players ranked in the top 50 in total quarterback pressures since 2017. Those four players are T.J. Watt (210), Cameron Heyward (176), Stephon Tuitt (150) and Ingram (134).

The 2021 @steelers defense features four different players ranked in the top 50 in total QB pressures since 2017.

Last season, Ingram registered just 28 pressures, according to Pro Football Focus. Those 28 total pressures, however, did come in just seven total games. Eight of those came against the Jacksonville Jaguars in Week 7, which was Ingram’s first game back in action since a knee injury sidelined him in Week 2. It is also worth noting that Ingram failed to register any sacks in 2020.

With Ingram missing nine regular season games in 2020, the former first-round draft pick out of South Carolina still managed to log a total of 362 defensive snaps played. Once again, if he stays healthy in 2021, there’s no reason to think Ingram can’t log around 400 snaps at a minimum. That works out to an average of 23.5 a contest as part of a 17-game schedule.

Ingram should still be viable enough as a pass rusher to help take some pressure off Steelers second-year outside linebacker Alex Highsmith, who is still developing himself in that phase after a nice rookie season that included him taking over the staring spot on the right side after Bud Dupree was lost for good to a serious knee injury in Week 12.

Make no mistake about it. the Steelers aren’t paying Ingram $4 million in 2021 for him to log just 10 snaps a game on average. They know what a healthy Ingram might be capable of doing in 2021, and that includes him adding a significant amount of more quarterback pressures to his career totals.