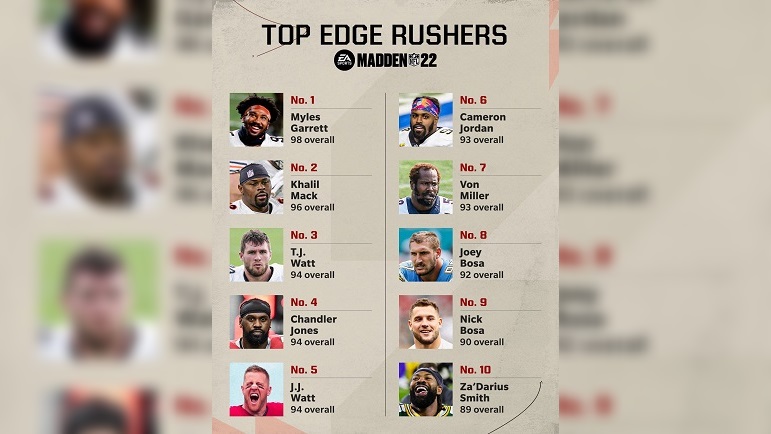 The Madden 22 ratings are trickling out and the one given to Pittsburgh Steelers outside linebacker T.J. Watt has many fans of the team now saying that the former first-round draft pick out of Wisconsin was snubbed… again.

Madden NFL 22 recently posted their top 10 edge rushers in the game, and Watt ranked third overall with a rating of 94. Ahead of Watt are Khalil Mack (96 overall) in second place and Myles Garrett (98 overall) in first. Watt was also given the same overall rating as Chandler Jones and his brother J.J. Watt.

Many feel Watt was snubbed for the annual NFL Defensive Player of the Year last season. That honor ultimately went to Los Angeles Rams defensive tackle Aaron Donald once again.

In a related story, the Madden NFL 22 rankings for defensive linemen do include two Steelers in the top 10 overall. Defensive tackle Cameron Heyward is ranked fifth overall while defensive end Stephon Tuitt is ranked ninth.