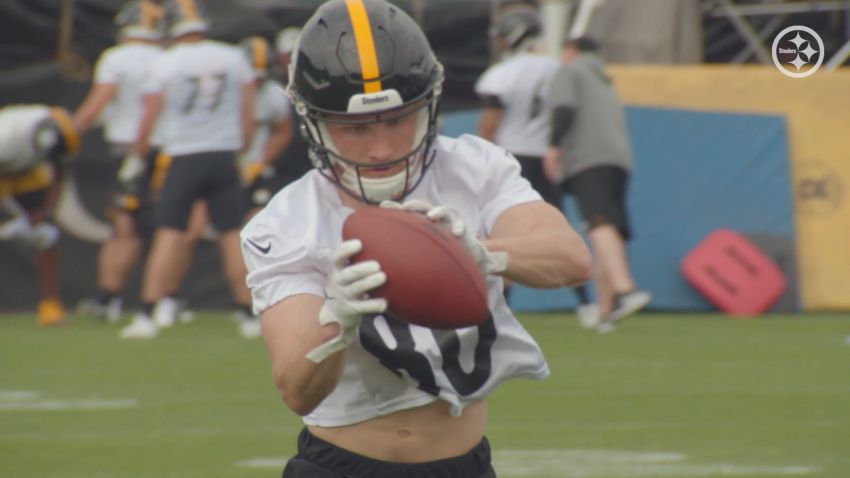 Wednesday is the day. The day the Pittsburgh Steelers report for 2021 training camp. Their first practice, not available to the public unfortunately, will take place on Thursday. And we’ll be out there at camp for the first padded practice next week, July 28th.

Before camp gets into full swing, I wanted to take a swing myself at some potential sleepers who could make noise this summer. They’re always hard to predict, players you think do well falter, players you ignored emerge and become the talk of camp.

But here are my best guesses. Five Steelers most people aren’t thinking or talking about who could impress this summer and at the least, make a good case for a roster spot.

Probably the most obvious name on this list. Brown has been pegged one of the Steelers’ UDFA sleepers essentially from the moment the team signed him. So maybe he doesn’t fully qualify under the “guy no one is talking about” label.

But Brown has the skillset and the path to make the 53. He has true slot corner experience. Built like Mike Hilton with similar style and swagger, he is a strong zone processor, impactful hitter, and willing to take chances on the football. That could burn him occasionally but if you’re going to be an undrafted guy trying to turn heads, you need to make plays. Defensive backs in this system have to take the football away, not just make the tackle. It’s still unlikely he wins the starting slot spot out of the gate but there’s a vacancy here. And Brown has a chance to get on the roster and push for that role.

He’ll need to perform well on special teams, too, of course, but he was a draftable talent and is a good scheme fit.

Another undersized player, but Sexton is a quality athlete. He ran a 4.44 40 and recorded a 10’2″ broad at his Pro Day, though he profiles as more of a straight-line player than someone with great agility (a 4.34 short shuttle/7.14 three-cone). Still, he was used as a gadget/motion player in college at Eastern Michigan and was a standout on special teams. As a sophomore, he notched 14 tackles and recorded a game-winning punt block touchdown to avoid an upset against Central Connecticut.

Pittsburgh didn’t draft a wide receiver this year for the first time since 2011. Five will likely make the roster: JuJu Smith-Schuster, Chase Claypool, Diontae Johnson, and James Washington are locks, while Ray-Ray McCloud will probably be back. But that could leave a sixth receiver spot for a guy like Sexton. He has tough competition — you can make cases for UDFA Isaiah McKoy or futures contract Tyler Simmons — but I think Sexton can impress Danny Smith and make a case as a gunner/coverage guy.

Pittsburgh might be deeper along the defensive line than any other position, making it hard for a guy like Anderson to even soak up reps. He’ll need to take advantage of chances given to him. But he has a bit of NFL experience and one career sack. He profiles as more of a classic run-stuffer and he’s a guy who could have a steady, solid camp. That still might not be enough to make the team and leap guys like fifth-rounder Isaiahh Loudermilk and Chris Wormley, but I think he’ll be in the mix.

The Steelers are looking for versatility after losing Mike Hilton and having Cam Sutton in a more static role in 2021. The team drafted Tre Norwood, but Maulet is the vet who can wear multiple hats. He’s lined up all over the secondary though profiles best as a slot corner or free safety, playing both spots with the Jets last season. He’s scrappy and doesn’t have a huge ceiling but I could see him as a poor man’s Sutton for his versatility.

We talked about the need to find someone who can rotate with Minkah Fitzpatrick this morning and Maulet has at least the ability to do it.

I’m not one kicking Benny Snell off the roster out of the gate. And it’s possible that Snell and Ballage can make the team if the Steelers keep four running backs, as they did last season. Ballage’s career NFL numbers are poor but he’s carved out a role in short-yardage situations, an area where the Steelers desperately need to improve. Najee Harris, of course, will be the main guy to fix that problem, but I can see Ballage impressing in full-contact run sessions and the team’s well-known goal line drill later in camp.

A practice setting may let him show off a little more explosiveness and like Snell, he carries a healthy amount of special teams value.

UG3 is a guy I’ve been high on since watching him in his first training camp back in 2019. It was a much better summer than what I saw him put on his Akron tape, most notably as a tackler. His issue has never been about talent. He’s athletic, can cover, and improved as a finisher. A history of back injuries have been his downfall and listen, the odds of that issue going away forever aren’t great.

But when he’s heathy, the guy can still play, and he’ll remind fans of that during the summer. There’s a lot of competition here and again, the injury-concern is ever-present, but Gilbert has a lot of the tools you look for in an inside linebacker. That can at least make for an eventful couple of weeks.