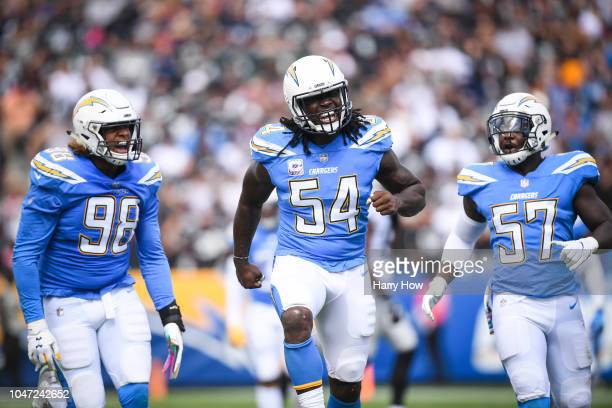 Following up on yesterday’s report of the Pittsburgh Steelers’ plans to bring in EDGE rusher Melvin Ingram, NFL Network’s Ian Rapoport tweeted Monday morning that visit will take place today. But the Steelers aren’t the only team interested in him. According to Rapoport’s report, the Kansas City Chiefs and Miami Dolphins are also showing interest.

The #Steelers are hosting veteran FA pass-rusher Melvin Ingram today, source said, as they look to fill a need before camp. Ingram also has had interest from the #Chiefs and #Dolphins.

Ingram, 31, has started 96 career games. Hampered by a knee injury last year, he failed to record a sack in seven starts. But he made the Pro Bowl from 2017-2019, recording 24.5 total sacks over that span. Ingram has 49 sacks in his NFL career.

He would provide much needed depth behind starters T.J. Watt and Alex Highsmith. Currently behind them sits Cassius Marsh, a veteran journeyman signed off the Colts’ practice squad last year, and sixth-round rookie Quincy Roche. The Steelers have good reason to try to upgrade the position here. Ingram is older than the typical defensive free agent the team historically has preferred under Kevin Colbert, but given the team’s situation, he’s worth being an exception.

While they do have more cap flexibility following David DeCastro’s release, it’s possible they won’t have enough money or opportunity to sign Ingram. Considering he has interest elsewhere, Ingram could decide to land somewhere else that may offer a bigger contract or more playing time.

Generally speaking, if players leave the Steelers’ facility after their visit, they don’t circle back. Pittsburgh hosted Karl Joseph earlier this offseason but he signed with the Raiders. They also brought in safety Malik Hooker. He remains a free agent.