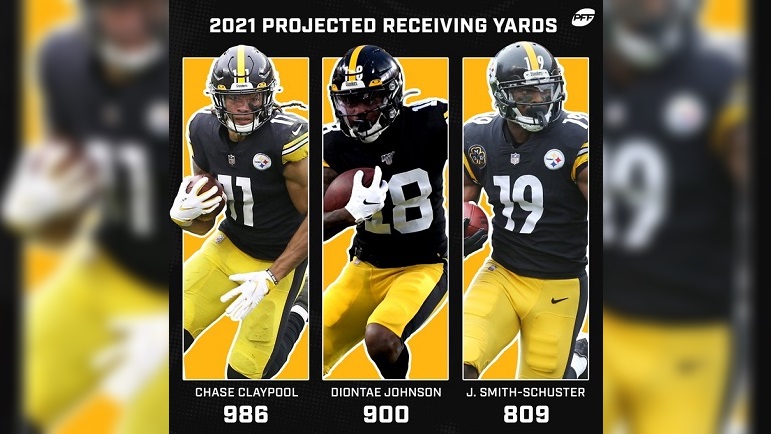 Who will lead the Pittsburgh Steelers in receiving yards in 2021? Pro Football Focus thinks they have the answer to that question.

In a recent Twitter post, PFF predicted that Steelers wide receiver Chase Claypool will lead the team’s group with 986 receiving yards in 2021. He is followed by fellow wide receiver Diontae Johnson with 900 yards and JuJu Smith-Schuster with 809 yards.

In 2020, the Steelers were the only NFL team to have four different receivers record at least 50 receptions for over 500 yards and five touchdowns. That group of four players was Claypool, Johnson, Smith-Schuster, and tight end Eric Ebron. Johnson, however, led the team with 923 yards.

Last season, Claypool, the Steelers’ second-round draft pick, finished his rookie campaign with 62 receptions for 873 yards (14.1 average) and nine touchdowns. The Notre Dame product also had two rushing touchdowns during the season. Also in 2020, Claypool tied Hall of Fame running back Franco Harris (1972) and former wide receiver Louis Lipps (1984) for the most touchdowns in franchise history during a rookie season with 11. Additionally, Claypool’s 62 receptions in 2020 were the most ever for a Steelers rookie and his nine receiving touchdowns were the most among all NFL rookies for the season.

Recently Mike Florio of Pro Football Talk indicated that he thinks Claypool will make a big leap in 2021.

“You can argue he’s already declared himself, but the stats at the end of the day weren’t what they could have been, or what they could be this year, especially if his team establishes the run and maybe they do a little bit of play-action,” Florio said of Claypool. “They didn’t play him as much as they could have (in 2020). I remember at one point, I went through all the gamebooks and looked at his playing time, and I’m like ‘why is this guy only on the field 30 percent of the time? He should be out there all the freaking time.’ I think he’ll be out there more this year. I think they’ll have the ball arching through the air more to him more often. They understand what he could do. I think he makes a leap this year.”