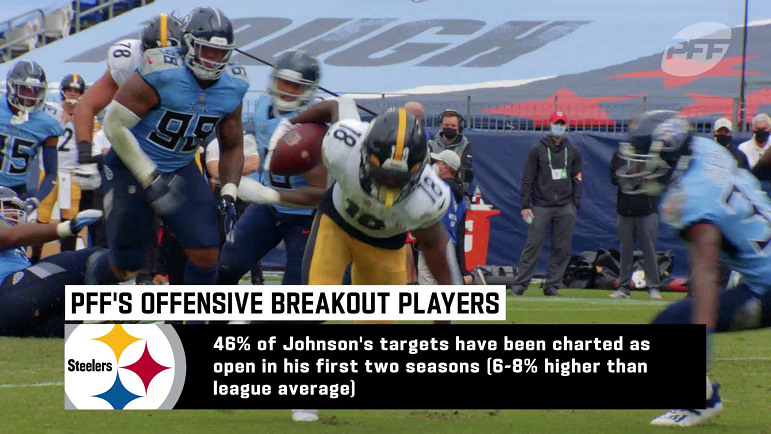 The hype train continues to roll down the tracks in a positive direction for third-year Pittsburgh Steelers’ wide receiver Diontae Johnson.

Many are projecting a true breakout season for the third-year pro, who has come close to totaling 100 catches and 1,000 yards in his first two seasons. Now, Pro Football Focus is on the hype train with Johnson and they appear to be the conductor, labeling Johnson as an offensive breakout player across the league, taking the league by storm in 2021.

Sam Monson, a lead analyst for PFF who has been highly critical of the Steelers the last two years, surprisingly labeled the third-year receiver coming off of an up-and-down 2020 season marred by drops.

“There’s a monster season just waiting to happen for Pittsburgh wideout Diontae Johnson,” Monson said. “With Ben Roethlisberger back for another shot at success before his career winds down, this may be the season we see it [Johnson breakout]. Few receivers are open as often or as consistently as he is. And that’s always the best starting point for big numbers. At least 46% of Johnson’s target’s been charted as opening each of his first two years in the league, some 6% to 8% higher than the league average.

“Johnson also held himself back last season with a massive 15 drops, the most in the NFL,” Monson added. “But we know drops come and go by season, and he’s unlikely to be stung as badly in the future. Diontae Johnson could easily emerge as Pittsburgh’s number one receiver this year and put up huge numbers.”

The drops certainly hurt Johnson’s stock last season, which seems to have some much lower on him that they should be. He’s steadily improved — at least statistically — his first two seasons and is the best route runner on the Steelers and arguably one of the better ones in the NFL in general.

With his elite-level route running, Johnson consistently works himself open, as shown by PFF’s open percentage, which not only means Johnson has no issues working himself open but won’t lack for targets either. Banking on a Johnson breakout is a smart play, though it remains to be seen how his route running and YAC abilities factor into Matt Canada’s offense, which tends to scheme up completions rather than relying on guys getting open.

Regardless, there’s no denying Johnson’s immense talents. Here’s hoping he puts it together in 2021.