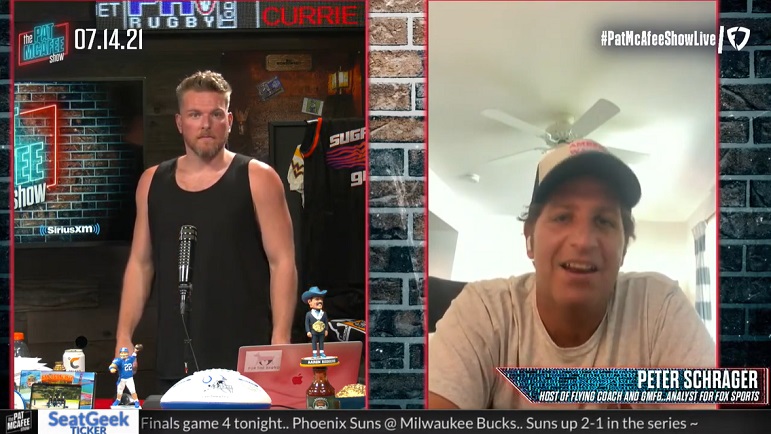 The Pittsburgh Steelers 2021 training camp will be getting underway in a few more days and ahead of that happening, it certainly seems that a large contingent of the mainstream talking heads and analysts are down on the team’s prospects for the upcoming season. There are, however, a few such people who aren’t buying that the Steelers are destined to miss the playoffs in 2021 and do so with a sub .500 record at that. Peter Schrager of the NFL Network is definitely one of those few people.

During a Wednesday interview on ‘The Pat McAfee Show,’ Schrager was asked about the recent reports concerning Roethlisberger currently being in great shape ahead of this year’s training camp getting underway and that he has a diet now that would potential rival the one that Tampa Bay Buccaneers quarterback Tom Brady has been known to have been on for quite some time.

“I haven’t seen him, but I know this, that team. I know the vibe in that building, they have been so hungry since that loss to the Browns, and they have been watching and listening and they are well aware of what people think they’re going to be,” Schrager said. “The fact that they doubled down on bringing back Big Ben, the fact that they were able to bring back JuJu after everyone figured he was going to sign a bigger deal somewhere. There’s a lot of guys who have been disrespected in the media. Disrespected by other teams and disrespected by the entire NFL landscape. and they’ve got the one coach in the league who will probably lean into that more than any other coach possibly could. I would be shocked if the Steelers are not relevant and playing for a playoff game this season.”

Schrager also gave more kudos to the Steelers, head coach Mike Tomlin and Roethlisberger during a Wednesday morning segment on ‘Good Morning Football’ as well. That started with some praise for Tomlin.

“I feel like Mike Tomlin has spent this entire off season listening and preparing for what’s going to be a training camp in which he emboldens these players to really take on a us against the world attitude,” Schrager said.

Schrager went on to say Wednesday morning that he believes the Steelers offense has a legitimate chance to be just fine in 2021 and not only because the team added running back Najee Harris via the first round of this year’s draft, but also because they have installed Matt Canada as their new offensive coordinator after he spent the 2020 season as the team’s quarterbacks coach.

“Well, now Matt Canada is now an NFL offensive coordinator and he’s with Ben and it’s his first time doing it at this level. He’s got tons of experience. I think the offense is going to look different. I think this team is going to play with a different fire based on how it ended last year. And most importantly, I think Ben is going to look and play differently than he ended the season last year.”