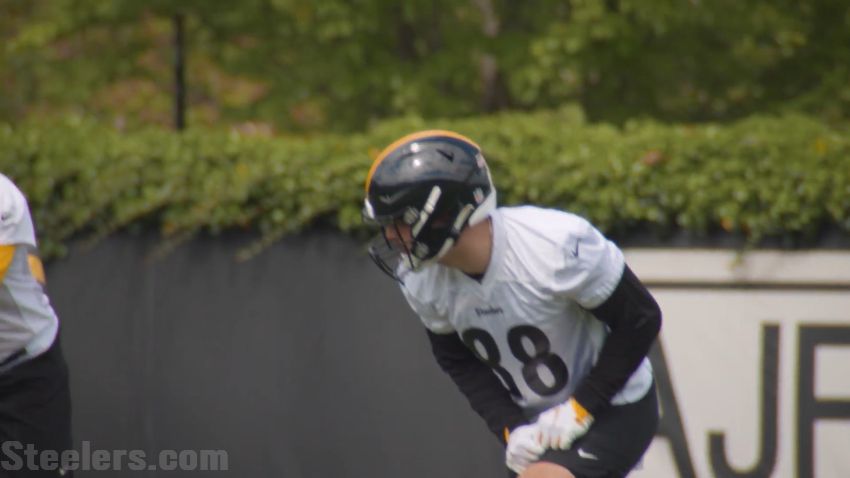 For those on the roster’s fringe, the path to making the team is impressing special teams coordinator Danny Smith. Pat Freiermuth doesn’t have to worry about making the 53. But his path to playing on Sundays runs through offensive coordinator Matt Canada. And so far, Canada likes what he sees.

Speaking after today’s practice, Canada was asked to give his thoughts on Freiermuth’s performance three days into training camp.

“Really been pleased with him,” Canada told reporters via a team transcript. “Certainly, we were all, obviously, excited when we got him. Excited he was still around. And I think he has exceeded or met every expectation. He’s certainly a student of the game. Very conscientious and working hard. I like him a lot. He’s done a very good job as this point. As everybody, a long way to go, but really, really pleased with him.”

High praise from the first-year OC. Freiermuth was billed as a smart and hard worker coming out of Penn State, deployed in a more traditional way than a lot of other college tight ends. He has experience as an in-line, Y tight end and has proven himself to be at least a serviceable blocker. Still, the learning curve for a rookie tight end is steep and most struggle that first season. The Steelers aren’t even in pads yet, much less stepped inside a stadium, but Freiermuth is off to a good start.

He’s expected to serve as the backup tight end behind starter Eric Ebron. In fact, Freiermuth was listed as the #2 tight end on the team’s first depth chart of the summer, already listed ahead of names like Zach Gentry and Kevin Rader, more veteran and slightly more established players.

Because Freiermuth is a much better blocker than Ebron, he could see some run in 11 personnel when the Steelers want a better ground attack. He could also be the in-line player in 12 personnel with Ebron flexed out to the slot and JuJu Smith-Schuster split out wide.

With Ebron set to hit free agency after the season, Freiermuth should be the Steelers’ starting tight end in 2022 unless he seriously flops this season. Pittsburgh is hoping to have their long-term starter after making their first serious draft investment in the position in well over a decade.