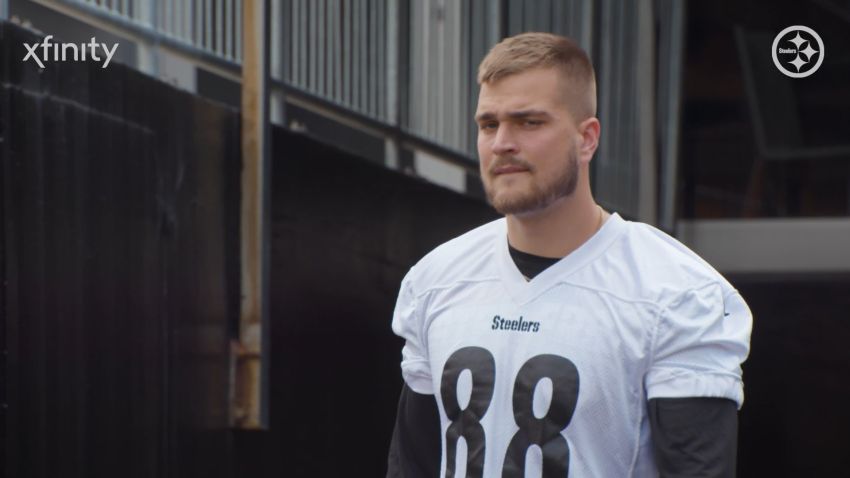 The Steelers threw fans and analysts a curve ball in the second round when they passed on an offensive lineman—perhaps most notably at the time, center Creed Humphrey—in favor of the second-best tight end in the class, Pat Freiermuth out of Penn State.

It had been well over a decade since the last time the Steelers used a draft pick on a tight end in the first four rounds, so it was certainly overdue for the investment, but in terms of the hierarchy of needs, almost everybody felt the offensive line should come first.

However, the team believed that the depth in the class at center was better than most felt. To their credit, they made no secret about this. General manager Kevin Colbert said as much during the pre-draft process. And with Vance McDonald retired, Eric Ebron a non-blocker on a one-year deal, and not much to speak of behind them, there’s no doubt that tight end was, in fact, a clear need.

And the sorts of tight ends the Steelers like to bring in have become increasingly scarce. Freiermuth is a bit of an antiquated breed at this point as a prospect who can be both a receiver and a blocker, in an era in which those two roles have largely become fragmented—see Ebron and McDonald just last season.

Freiermuth in particular showed strength in the red zone. The Steelers have already talked about him potentially helping him in that area. The ability to have two pass-catching tight ends on the field at the same time is something that new offensive coordinator Matt Canada is hoping that he can take advantage of.

And, of course, he’ll have to take over the run-blocking role. Frankly Ebron is not going to do it, and can’t do it. He’s simply not a blocker, and will never be able to do it with most consistent effectiveness, so failing the addition of a quality blocking tight end, you would be looking at Joe Haeg getting a lot of work as a tackle-eligible.

With Freiermuth, though, you have a young prospect who will have years to develop. He’s only going to get better as the years go on, and one can easily see him becoming a favorite teammate of whoever ends up succeeding Ben Roethlisberger under center.