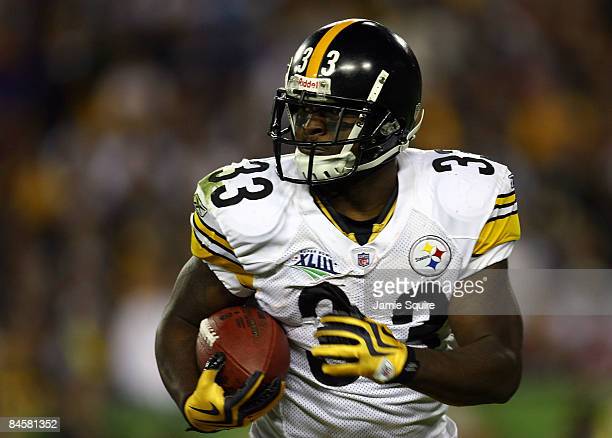 Here’s a fun (my definition of it, anyway) trivia question.

It was our good buddy Gary Russell. He got the party started with a one-yard plunge early in the second quarter to open up a 10-0 lead over Arizona. To this day, he remains the only running back in Super Bowl history to record a rushing touchdown yet finish the game with negative yardage. Two carries, negative three yards, and this score.

He followed behind all the household names of Steelers’ history. Carey Davis, Sean McHugh, Darnell Stapleton, Justin Hartwig. All jerseys I’m you have in your closet.

Russell’s career began as a UDFA out of Minnesota. He became part of the team’s timeshare taking over for Marion Barber and teaming up with Laurence Maroney as a pair of 1,000-yard running backs. Russell burst on scene with 1,130 yards (Maroney led the team with 1,464) including a 118-yard performance to help beat Michigan for the first time since 1986.

Despite that great season, Russell left school in February of 2006. The details of why are a bit unclear but were related to academics. That spring, Russell was no longer officially enrolled in the university and took responsibility for whatever issue made him ineligible.

“I’m mostly frustrated and disappointed with myself because I could have avoided this problem,” Russell told the Minneapolis Star Tribune. “I messed up.”

2006 should’ve been his star year with Barber and now Maroney in the NFL. Instead, he transferred to a JUCO, off the NFL’s map while the Golden Gophers posted their first losing season since 2001. Had he stayed at Minnesota, he likely would’ve been drafted. Instead, his name wasn’t called in the 2007 Draft, and he signed with the Steelers as a UDFA.

He made three appearances his rookie year, carrying the ball seven times for 21 yards and one first down. Six of those carries came in the regular season finale against Baltimore. For 2008, his role expanded into something of a short-yard specialist, finding the end zone three times on just 28 carries and a 2.8 per-carry average. He also, somehow, was the team’s starting kick returner, averaging 23 yards per kick as the team searched for Allen Rossum’s replacement.

In that ’08-09 Super Bowl run, Russell scored twice Once in the Divisional win over the Chargers and again in the Super Bowl to help beat the Cardinals. Both touchdowns were from one yard out. He was yard-sale Jerome Bettis circa 2004-2005. A big back, Russell listed at 5’10”, 205 (and probably played heavier than that) vultured away touchdowns down near the goal line. All five of his NFL touchdowns, regular season and playoffs, came within three yards out.

These days, he’s an easy name to forget. But for at least a couple moments, including the second quarter of Super Bowl 43, all of Steelers’ Nation cheered for him.