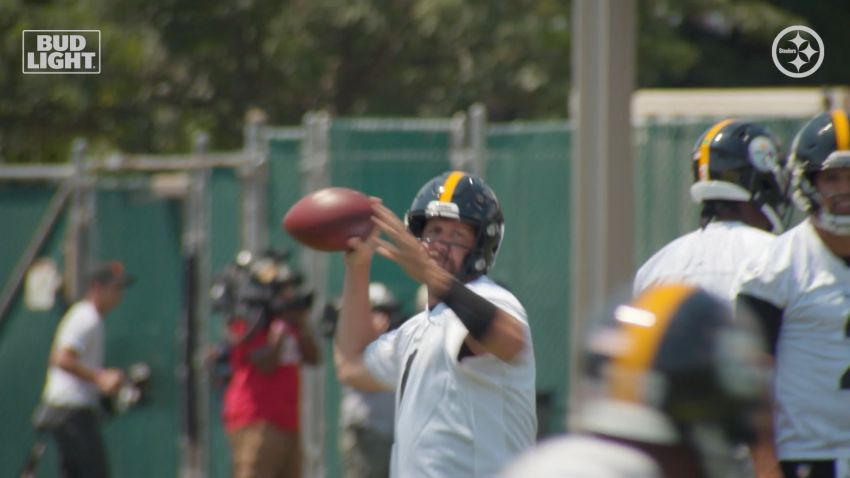 When Ben Roethlisberger showed up looking slim and trim to training camp on Tuesday, there was much debate regarding his appearance and if he remade his body or not based off of an offseason report that he bought into a strict diet.

Some took that opportunity to state that they felt Roethlisberger was fat and out of shape, which drew plenty of laughs. But the NFL Network Emmy-nominated TV show Good Morning Football went in another direction, discussing if a new and improved Roethlisberger could help him hold up later into the season one year after the wheels fell off the Steelers after starting 11-0.

Kyle Brandt, the grandson of legendary Dallas Cowboys scout and executive Gil Brandt, compared photos of Roethlisberger side-by-side dating back to 2016, eventually coming to the belief that he has a new body ahead of the 2021 season, and could hold off the rest of the AFC North and the three hotshot young quarterbacks for at least one more season.

“There’s a such a fun dynamic in this division because it’s Ben and these three young phenoms,” Brandt said. “I always come back to this; this time of year in a few weeks everyone in what we do will pick their division winners. And like, I don’t think there’s going to be a lot of love on Pittsburgh. I really don’t because it’s fun to pick Cleveland and it’s fun to take a chance on Cincinnati and Baltimore’s Baltimore. I think it’s interesting. Like, don’t think for a second that like the old man might not clean up one more year. You called it his last ride. Like Tom, we were on the show after they lost that Cleveland game, I thought he was going to retire. I thought that was it. Like, he just looked spent, he looked exhausted. But if this is the last ride, like very motivational as an athlete that these three young guys, these MVPs, these two number one overall picks are coming for my division? Can I send them off one more time?”

The Steelers’ ability to hold off the likes of the Ravens, Browns, and Bengals one more year will rest heavily on Roethlisberger and his level of play. While a lot of that will depend on the play of the offensive line in front of him and the run game behind him, if Roethlisberger can maintain his level of play from last season and put up similar numbers, the Steelers should be able to hold off the likes of Cleveland and Baltimore.

Being “in shape” and taking his fitness more serious ahead of what could be his last season will certainly play a factor in him not fading down the stretch, Nate Burleson pointed out.

“He’s aging. He understands that his arm isn’t as strong as it used to be. You know, when you add the salt and pepper things change and he’s going to have to change the way he does things on the field, he’s going to have to push that ball down the field and you have to push it, push it real good. Yeah. I’m talking deep. Let’s do some deep passes,” Burleson said. “Let’s talk about this offense and if he can do this Kay [Adams], with the intermediate passes, not just at the beginning of the year, but towards the end of the year. Cause I saw a significant drop-off in the production. We’re talking about deep shots down the field. I don’t know if it was lack of confidence in the pass catchers. I’m not sure if it was the weather’s starting to wear on an aging quarterback. I don’t know what it was. What I do know if he’s trimmed down, I hope him being trimmer can help him deliver the ball better towards the end of the season. If they can do that while leaning on the run game with Najee Harris, they’ll be okay.”

Well that’s an interesting angle to take as to why Roethlisberger appeared trimmed down ahead of the start of training camp. For what it’s worth, I don’t think his arm was the issue down the stretch last season. Yes, Roethlisberger did point out that his arm was a bit tired at times considering the thousands of footballs he had to throw during rehab just to get ready for the 2020 season, but watching the tape there’s nothing that showed Roethlisberger somehow lost strength down the stretch.

Just pop on the tape against Indianapolis in Week 16, specifically the second-half comeback. His arm looked good down the stretch. Who knows if being trimmer will somehow help his arm hold up down the stretch in his age 39 season, but what I do know will help that is a run game that doesn’t force the Steelers to throw the football 40+ times a game every week.

As far as taking deep shots down the field, that wasn’t the issue either. He had the third-most passing attempts of 20+ yards down the field in 2020. What he needs to do is connect on those throws a bit better with improved accuracy, but he doesn’t need to go all gunslinger again and just air it out every chance he gets.

The discussion was an interesting one, but there needs to be more nuance to the stances some of these talking heads take.